DOES BACA REFER TO MECCA?

PSALM 84: DOES BACA REFER TO MECCA? 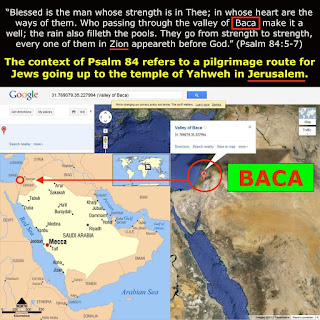 Muslim entertainers like Ahmed Deedat, Zakir Naik, Shabir Ally and Yusuf Estes have manufactured out of thin air the teaching that an Old Testament reference to a place that went by the Hebrew name “#Baca” in Psalm 84 somehow means Mecca, a place which, at the time the Psalm was written, did not exist and was nothing more than barren wasteland.

Uninformed Muslim dilettantes take up the words of propagandists like Deedat, Naik and Estes as the gospel truth, and parrot back their screechings endlessly. They gleefully proclaim that the Bible clearly refers to Mecca in Psalm 84:6, giving, in their minds, legitimacy to a seventh-century Arabic word that appears only one time in the Qur’an at sura 3:96 as “#Bakka”. This despite the fact that this Bakka was written some 1500 years after the Hebrew, in a primitive form of Arabic that only appeared after 300 AD.

The obvious question is how could a Hebrew word refer to another word in a different language that would not exist for another 1500 years? A basic understanding of the chronology of the Bible vs the Qur’an is critical. It is much more plausible that Muhammad, if he even knew what he was doing, ,or more likely the various writers of the ahadith, writing two or three hundred years after Muhammad, sought to create an ancient link to Mecca in the seventh, eighth or ninth centuries by projecting the word Bakka back 1500 years into the past.

There is, of course, absolutely no archaeological or historical evidence that the present city of Mecca existed at all prior to about 400 AD. This is why the Baca/Bakka reference is so vitally important to Muslims.  Lacking any hard evidence that Mecca is an ancient city as claimed in the traditions,, they will grasp at anything, no matter how implausible, to make their case.

NOTES: This is a celebration of the pilgrimage to the Temple.  The Psalm recounts the journey to Jerusalem, glorifying Zion (Mount Zion is the easternmost hill upon which Jerusalem is built). Verse 3, “the courts” refers to the outer parts of the Temple complex. Verse 4 is the progression to the altar. In verse 7 the valley of Baca is an unknown place and may refer to the Valley of Rephraim where baca trees (balsams) grow. Do balsams grow in Mecca?  Verse 7 “...each one appears before God in Zion.” is a reference to Jewish pilgrims on Mount Zion in Jerusalem.

When we look at the quote of Psalm 84:1-10 that Deedat, et al use to make their case that this refers to Mecca, it is important to note what they LEAVE OUT. Here is the passage as they quote it:

“1 How lovely is your dwelling place, O Lord of Hosts. 2 I yearn for the courts of the Lord; my body and soul shout for joy to the living God . . . [Verse 3 is missing] 4 Happy are those who dwell in Your house; they forever praise You. 5 Happy is the man who finds refuge in You, whose mind in on the [pilgrim] highways. 6 They pass through the Valley of Baca, regarding it as a place of springs, as if the early rain had covered it with blessing . . . [Verses 7,8,9 are missing] 10 Better one day in your courts than a thousand [anywhere else]; I would rather stand at the threshold of God’s house than dwell in the tents of the wicked.”

Here is the complete passage with the parts left out IN CAPS LIKE THIS:

“1 How lovely is your dwelling place, O Lord of Hosts. 2 I yearn for the courts of the Lord; my body and soul shout for joy to the living God. 3 EVEN THE SPARROW HAS FOUND A HOME, AND THE SWALLOW A NEST FOR HERSELF IN WHICH TO SET HER YOUNG, NEAR YOUR ALTAR, O LORD OF HOSTS, MY KING AND MY GOD. 4 Happy are those who dwell in Your house; they forever praise You. 5 Happy is the man who finds refuge in You, whose mind in on the [pilgrim] highways. 6 They pass through the Valley of Baca, regarding it as a place of springs, as if the early rain had covered it with blessing. 7 THEY GO FROM RAMPART TO RAMPART, APPEARING BEFORE GOD IN ZION. 8 O LORD, GOD OF HOSTS, HEAR MY PRAYER; GIVE EAR, O GOD OF JACOB. 9 O GOD, BEHOLD OUR SHIELD, AND LOOK UPON THE FACE OF YOUR ANOINTED.  10 Better one day in your courts than a thousand [anywhere else]; I would rather stand at the threshold of God’s house than dwell in the tents of the wicked.”

As is often the case, these kind of arguments unravel with just the application of a little bit of common sense and logic, which clears away the deception. Does it make any sense at all that the Jews would leave their cherished temple in Jerusalem, the very temple that God instructed them to build, only to wander 1400 kilometers across dry, desolate, trackless, barren desert wasteland to go to an uninhabited place in the western Arabian desert? Then once they got there they would walk seven times around a rock (the Ka’aba would not be built for another 2100 years) and having done that, walk another 1400 kilometers back across barren wasteland to their homes and their Temple in Jerusalem? It would take them two and one-half months to walk there and another two and one-half months to walk back; fully five months walking in the wilderness when they had their own Temple right there in Jerusalem. This is not even taking into account the tremendous amount of food and water they would have to carry with them to make the round trip.  Does any of this seem logical?  I would submit to you that it makes no sense at all.

Muslims get all excited that verse 6 in the King James Version mentions a well. “Passing through the Valley of Baca make it a well; the rain also filleth the pools.” Muslims say this is the well of Zam Zam. This is hardly definitive since there are wells all over the Middle East, and even more so since Muslim tradition says that the well of Zam Zam was dug by Muhammad’s grandfather, Abdel Mutaleb in the sixth century and who dedicated it to Asaf and Naelah, the most revered priest and priestess of the pagan Arab jinn devil religion.  Psalm 84 dates from around the fifth century BC, and so pre-dates Abdel Mutaleb’s well by a thousand years.

Yet the real clincher is in verse 7, where the place is identified as Zion.  Deedat and company left out verse 7 because it pins down the location of the pilgrimage as a journey to Jerusalem, not Mecca. Muslims would have to convince us (and themselves) that Mount Zion was located in the valley of Mecca. So it is with certainty that the Valley of  Baca refers to a place in Judea, a way station for pilgrims on their annual journey to Mount Zion in Jerusalem.

[Word of Promise, Word of Hope]