Does Aisha’s playing with dolls imply that the still not had menses? 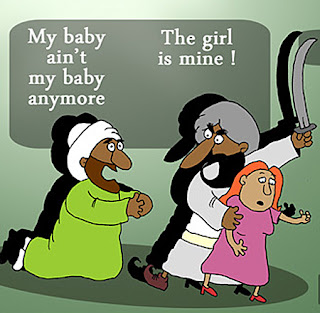 Actually, she had no menses till she was 14 years old…

Let’s give a look to one Islamic reply, related to the kind of dolls Aisha played with. Here, what Islam rules about dolls:

Some authors (mainly Ibn Uthaymeen), believes that there was a good chance that the dolls that Aisha played with are not the dolls that are forbidden for adults. Thus, just because Aisha was playing with dolls (the permissible ones) that does not necessarily imply that she didn't hit puberty. The burden of proof is to show that Aisha played with forbidden dolls with an image during the time she consummated the marriage with Muhammad in order to successfully prove that she didn't hit puberty.

REPLY: Here we the proof that Aisha was playing with dolls when she was married to Muhammad We will quote Salafi sources to prove that the dolls she was playing with were of the forbidden kind.

Al-Khattaabee said: From this Hadith it is understood that playing with dolls (al-banaat) is not like the amusement from other images (suwar) concerning which the threat (wa'eed) of punishment is mentioned. The only reason why permission in this WAS GIVEN TO 'AA'ISHA is because SHE HAD NOT, at that time, REACHED THE AGE OF PUBERTY.

More importantly, the reason why Salafi scholars were arguing for the fact that Aisha may have not reached puberty even at that time IS BECAUSE SHE WAS STILL PLAYING WITH UNLAWFUL DOLLS WHICH WAS ONLY ALLOWED FOR PREPUBESCENT GIRLS, THEREBY REFUTING SCHOLAR THAT KEEP USING TO SHOW OTHERWISE

Muslim authorities clearly teach that Aisha didn’t hit puberty even at the age of 14, which means that Muhammad was sleeping with a minor for at least five years?

This Salafi source state that the strongest view is that Aisha didn’t hit puberty at Khaibar even though she was 14, despite having some uncertainty regarding this fact?

So, Muslim authorities clearly teach that Aisha didn’t hit puberty even at the age of 14,which means that Muhammad was sleeping with a minor for at least five years?

Muslim scholars debated long-time among themselves whether there is abrogation concerning the permissibility of playing with 3-dimensional dolls due to the fact that Aisha was still playing with them when she was 14 years old even though Muhammad condemned such images.

Either Aisha was still minor and she was allowed to play with three-dimensional dolls, but then why is it haram today to do so, or she was major, but then, she was doing something haram because of her playing.

Some of the scholars stated that young girls were originally allowed to play with such images until Muhammad later abrogated it:

This Hadith has been used as a proof for the permissibility of possessing (suwar - of) dolls and toys, for the purpose of the little girls playing with them. This has been especially exempted from the general prohibition of possession of images (suwar).

He (al-Qaadee 'Iyaad) then says: Some of the scholars hold that this permission is abrogated (mansookh). Ibn Battaal was inclined to this opinion. It was also narrated from Ibn Abi Zaid, from Maalik that he disliked (kariha) that a man would buy for his daughter images (suwar) [dolls]. From this ad-Daawoodee considered stronger the opinion that this permission is abrogated.

Al-Bayhaqee - after narrating this Hadith and its sources (takhreej) - said: "The prohibition of possessing images (suwar) is firmly established. Therefore, the permission given to 'Aa'isha (may Allah be pleased with her) in this matter should be understood to have been before the prohibition [and therefore abrogated]" Ibn al-Jawzee has firmly stood on this position.

This is why these Muslims were trying to prove that Aisha, at 14, was still a prepubescent girl since they didn’t want to opt for the position that playing with three-dimensional dolls was abrogated in order to explain away the contradiction within these narratives. They want to keep the view that such images are only lawful for prepubescent girls, and since Aisha was still playing with them at the age of 14 she must have not reached puberty even at that age