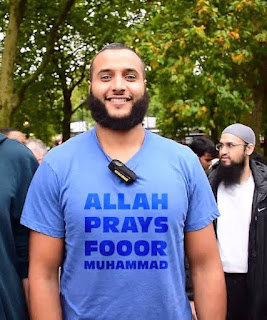 The ongoing exploits of Fr. Zakaria Botros: "God does not pray!"

Recently Father Zakaria Botros—also named World Magazine’s “Daniel of the Year”—briefly examined the oft-repeated phrase uttered by Muslims every single time Muhammad’s name is evoked, and which is often relayed in English as “blessings and peace upon him” (also seen as the acronym PBUH—“peace be upon him”).

The original Arabic phrase uttered after Muhammad’s name is Sala Allah ‘aliyhi we sallam, which literally translates into “Allah pray on him and peace.” This is founded onKoran 33:56, where it says that "Allah and his angels pray (yi-sal-un) on the prophet..."

At one point or another, every Arabic speaker who reflects on this phrase asks, “Why—and how—does Allah go about praying on Muhammad?”

The standard response from the ulema has been that, in this context, Sala does not mean “pray” but rather “bless.” This is why the phrase states “on him” (‘aliyhi) not “to him” (iliyhi): only the latter would clearly mean that Allah prays to Muhammad—which, of course, would be absurd.

As Father Botros points out, however, there are some problems with this explanation. First of all, rare are the Arabic dictionaries indicating that the word Sala means “to bless”; indeed, theonly time Sala means "to bless" is when Allah does it, as in the aforementioned verse, which obviously is never translated as "pray."

Botros’ pertinent question: If Sala means to “bless,” why then does the recitation go on to use the proper Arabic word for “bless” (Baraka/Barik) in the same exact context? If both mean “bless,” why the redundancy? Surely, then, Sula does not mean bless; does it mean "pray"?

He then read from a very telling hadith recorded in Kitab Al Sunna by Abdullah bin Ahmad, vol.1, p.272: Apparently, when Muhammad reached the 7th heaven during the Isra and Mi'raj, he encountered Gabriel, who immediately said “Shh! Wait, for Allah is praying (Sala).” Muhammad asked: “Does Allah pray?” to which Gabriel said, “Yes, he prays.” Muhammad then asked, “What does he pray?” and Gabriel said “Praise! Praise the Lord!”

Father Botros, now visibly irritated, put the book down, looked in the camera, and asked: “How can Allah pray, and to whom?! Who does Allah magnify?!”

It was not clear what his rhetorical questions meant. On the surface, it sounded as if he was just annoyed at the notion that Muslims say that Allah "prays" (to which he called them kafirs, infidels, for doing so). More closely, however, it almost seemed that he was agreeing that "Allah" does pray and magnify "Another."

In fact, it seems he may have been subtly implying that Allah is but another creating being -- like the Jinn and Iblis -- who, perhaps in fear and trepidation, worships the "real" God.

Just one more reason to make Muslims try to eliminate Botros -- even while other, more sober, Muslims reconsider what they have long held as "gospel" (or, in this case, "Qur’an").