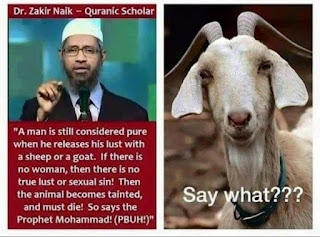 Unlike the West, Islamic societies do not universally harbor negative attitudes towards bestiality. Many Muslims seek out gratification or are indifferent to this perversion, and in some cases it is even openly promoted .This is all in stark contrast with their attitudes towards homosexuality and their allowance of pedophilia.

Therefore to claim that the West without the guidance of Islam has allowed bestiality is not only false, but hypocritical when you consider that this perversion, alongside pedophilia, is left largely unhindered by the Islamic clerisy in their societies and runs rampant among followers of Islam.

Miner and DeVos (1960)[ professor emeritus of anthropology at the University of California, Berkeley, and a pioneer in cultural psychology, ethnic identity and migration studies ] comment that amongst Arab tribal cultures, “Bestiality with goats, sheep, or camels provides another outlet. These practices are recognized as common among boys.” Havelock-Ellis [note 52] states “The Arabs, according to Kocher, chiefly practice bestiality with goats, sheep and mares. The Annamites, according to Mondiere, commonly employ sows and (more especially the young women) dogs.”Historical And Cultural Perspectives On Zoophilia,Serving History .A 9th century, arabic literary work (“Risalat mufakharat al-sudan ‘ala al-bidan”) highlights the prevalence and history of beastiality among many arab tribes . In the next Fatwa as you see sex with animal in original Arabic version of this fatwa is considered ( نكاح الحيوانات ) that is sex with animal, Marriage to animals!! :

“Sex with animals (نكاح الحيوانات ) before the mission (Islam) was wide spread and many narrations are narrated that it is halal but makrooh (disliked). And on the compulsory precaution one should abandon this practice that may cause self harm. And you must admit this to the owner of the sheep and pay the owner.

The Arabs have never taken quite so condemnatory attitude towards the practice of bestality, and indeed a popular Arab saying that “The pilgrimage to Mecca is not complete without copulating with the camel.”[Robert E.L. Masters – Forbidden Sexual Behavior and Morality – The Julian Press, 1st edition 1966,]

Apparantly this mentality is not against Islam and even it is reflected in some hadith:

=() Abu Dawud Book 38, Number 4450:Narrated Abdullah ibn Abbas:”There is no prescribed punishment for one who has sexual intercourse with an animal. ”As you see in this hadith if the action of having sex with animal is forbidden then why there is not any prescribed punishment for this forbidden action? According to Judith Worell (PhD, a clinical psychologist and Professor Emerita at the University of Kentucky in Lexington winner of Gold Medal Awards by The American Psychological Foundation (APF) recognize distinguished and enduring records of accomplishment in four areas of psychology ) :”the permissibility of bestiality seems to have been left open to ‘interpretation.’”[ Encyclopedia of women and gender: Volume 1 (p. 298) – Academic Press; 1 edition, September 27, 2001, ISBN 9780122272455 ]

In Islam there are issues that are strictly forbidden ,though in many cases Muhammad is exempted of some of them , yet still the laws are applied to the people. Under those laws there is not excuse, exception, or explanation and details. For example ” pork meat “is forbidden ,period. there is not any kind of exception and details in this law. Bestality is not one of those issues .If Islamic teachings were truly opposed to such a practice, then this omission is somewhat surprising when you consider that, historically, bestiality was indigenously accepted in the Middle-East.For example according to Ayatullah al Uzma Khomeini’s book , “Tahrirolvasyleh” fourth volume, Darol Elm, Gom, Iran, 1990 :

In simple word: ”A man can have sex with animals such as sheep, cows, camels and so on. However, he should kill the animal after he has his orgasm. He should not sell the meat to the people in his own village; but, selling the meat to the next door village should be fine!!!!”As you see , if the sex with animals are forbidden in Islam then there is no need for details , excuses and other rules.

Is this Islamic morality that Muslims are talking about? In a society where homosexuals and adulterers are stoned to death for so called “sexual immorality” you would expect a similar outcome for someone caught having sex with an animal but surprisingly this is not the case!! and even Islamic thinker (like Ayatullah Khomeini) recommend proper way to have sex with animals!!!!

Now let see what Quran says about bestality? As usual Quran is a confused book in this topic as well:

=() Quran 42:11 :” فَاطِرُ السَّمَاوَاتِ وَالْأَرْضِ ۚ جَعَلَ لَكُمْ مِنْ أَنْفُسِكُمْ أَزْوَاجًا وَمِنَ الْأَنْعَامِ أَزْوَاجًا ۖ يَذْرَؤُكُمْ فِيهِ ۚ لَيْسَ كَمِثْلِهِ شَيْءٌ ۖ وَهُوَ السَّمِيعُ الْبَصِيرُ ” Shakir: The Originator of the heavens and the earth; He made mates for you from among yourselves, and mates of the cattle too, multiplying you thereby; nothing like a likeness of Him; and He is the Hearing, the Seeing.

Pay very close attention the Arabic preposition ” مِنْ “(MIN) and the conjunction ” وَ “(va) in the sentence. As a result of the wording of the text this is how it literally reads:

“…The Creator of the heavens and the earth, he has made for you spouses FROM yourselves AND FROM the cattle spouses, whereby He multiplies you…” Now here we have several problems and questions:

1)What does Allah mean when he says he has created mates or spouses from themselves (means “you” “yourselves”)? Who are the “yourselves” of the sentence?

a)Are “they” both men and women, and if so does this mean that marriage can take place only between members of the opposites sex?

b)Can marriage occur between all sexes ( heterosexual, homosexual, lesbian marriages are all permitted by this text)?

c)Since the text addresses the same group(“you”) when it mentions that Allah also created mates from the cattle does this therefore mean that(“you”) humans can engage in sexual intercourse with animals?

d)Why even mention mates from the cattle in a text dealing with human sexual relations?

e)If the text means human can have sex with cattle then with the guidance of Allah they can multiply mankind, then Quran thought that man could cause an animal to get pregnant thereby conceiving human species? Or perhaps Muhammad assumed that the union between these two species would result in a third type of species thereby propagating two kinds of creatures simultaneously?( as they did already : Djins and mankind!).

f) May be Quran is trying to say that Allah created you spouses and the cattle for enjoyment, and yet he multiplies humans only through sexual union amongst themselves.

g) maybe Allah is saying that human intercourse is for both pleasure and multiplication, whereas intercourse with cattle is strictly for pleasure!

IF Muslims claims that homosexual and bestial relations are condemned in Islam can they provide explicit Quranic references ?In simple words, by using the Quran alone can Muslims show that Allah abhors bestial acts?

There are 2 verses that indirect supports for the permissibility of bestiality:

2)=() Quran 70:28>>>35 Asad: for, behold, of their Sustainer’s chastisement none may ever feel [wholly] secure; and who are mindful of their chastity, [not giving way to their desires] with any but their spouses (azwajihim) – that is, those whom they rightfully possess [through wedlock] – : for then, behold, they are free of all blame, whereas such as seek to go beyond that [limit] are truly transgressors; and who are faithful to their trusts and to their pledges: and who stand firm whenever they bear witness; and who guard their prayers [from all worldly intent]. These it is who in the gardens [of paradise] shall be honored!

some Muslims use these verses to prove that Islam does not permit bestiality because apparently limit lawful relations to a man is spouses or slave girls, and anything beyond that is over the limit that Allah has ordained. BUT the problem is that “those whom your right hands possess” are not limited to wives or female slaves. Since the right hand usually is the dominant hand so it is a figurative expression to indicate anything that are under your control. These verses refer to all the believers, male or females, husbands or wives, and to whatever a person owns or possesses such as animals, property etc. There is even one place in the Quran talks about the list of persons and things that a man possesses:(3:14) : ” زُيِّنَ لِلنَّاسِ حُبُّ الشَّهَوَاتِ مِنَ النِّسَاءِ وَالْبَنِينَ وَالْقَنَاطِيرِ الْمُقَنْطَرَةِ مِنَ الذَّهَبِ وَالْفِضَّةِ وَالْخَيْلِ الْمُسَوَّمَةِ وَالْأَنْعَامِ وَالْحَرْثِ ۗ ذَٰلِكَ مَتَاعُ الْحَيَاةِ الدُّنْيَا ۖ وَاللَّهُ عِنْدَهُ حُسْنُ الْمَآبِ “Shakir: The love of desires, of women and sons and hoarded treasures of gold and silver and well bred horses and cattle and tilth, is made to seem fair to men; this is the provision of the life of this world; and Allah is He with Whom is the good goal (of life).

There are verses in Quran where “those whom your right hands possess” includes more than just the female captives ( 4:36/ 16:71/ 30:28). you can even see this concept in some of the famous Islamic debaters speech such as :Osama Abdallah or Muhammad Asad ( journalist, traveler, writer, linguist, thinker, political theorist, diplomat and Islamic scholar ).

This is Islam that they try to hide from people and many Muslims are kept in darkness and have no clue about their own” Noble book” and the author “Noble role model”!!!!