Pop singer Selena Gomez declares: “I am a child of God, saved by grace.” 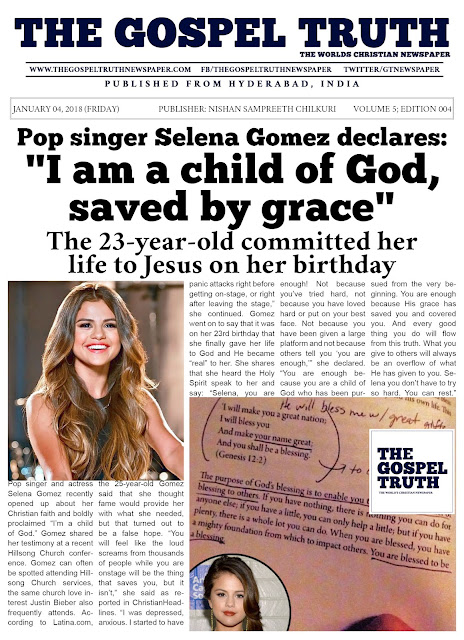 Pop singer Selena Gomez declares: “I am a child of God, saved by grace.”
The 23-year-old committed her life to Jesus on her birthday.

Pop singer and actress Selena Gomez recently opened up about her Christian faith and boldly proclaimed “I’m a child of God.” Gomez shared her testimony at a recent Hillsong Church conference.

According to Latina.com, the 25-year-old Gomez said that she thought fame would provide her with what she needed, but that turned out to be a false hope. "You will feel like the loud screams from thousands of people while you are onstage will be the thing that saves you, but it isn't,” she said as reported in ChristianHeadlines.

“I was depressed, anxious. I started to have panic attacks right before getting on-stage, or right after leaving the stage,” she continued. Gomez went on to say that it was on her 23rd birthday that she finally gave her life to God and He became “real” to her.

she declared. "You are enough because you are a child of God who has been pursued from the very beginning. You are enough because His grace has saved you and covered you. And every good thing you do will flow from this truth. What you give to others will always be an overflow of what He has given to you. Selena you don’t have to try so hard. You can rest."
at November 13, 2018