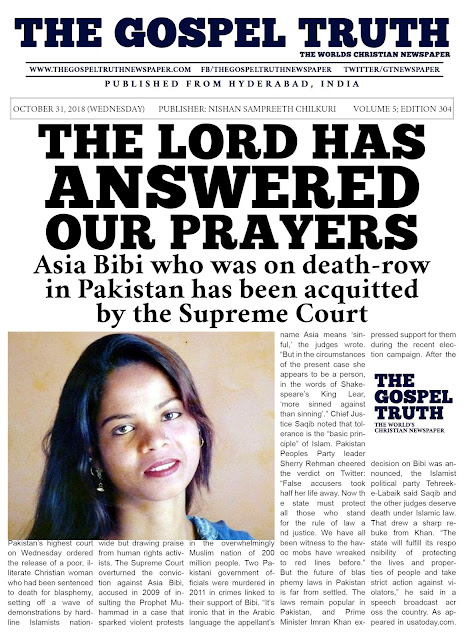 The Lord has answered our prayers.
Asia Bibi who was on death-row in Pakistan has been acquitted by the Supreme Court.

Pakistan's highest court on Wednesday ordered the release of a poor, illiterate Christian woman who had been sentenced to death for blasphemy, setting off a wave of demonstrations by hard-line Islamists nationwide but drawing praise from human rights activists.

The Supreme Court overturned the conviction against Asia Bibi, accused in 2009 of insulting the Prophet Muhammad in a case that sparked violent protests in the overwhelmingly Muslim nation of 200 million people. Two Pakistani government officials were murdered in 2011 in crimes linked to their support of Bibi. “It's ironic that in the Arabic language the appellant’s name Asia means ‘sinful,’ the judges wrote.

"But in the circumstances of the present case she appears to be a person, in the words of Shakespeare’s King Lear, ‘more sinned against than sinning’.” Chief Justice Saqib noted that tolerance is the "basic principle" of Islam. Pakistan Peoples Party leader Sherry Rehman cheered the verdict on Twitter: "False accusers took half her life away. Now the state must protect all those who stand for the rule of law and justice. We have all been witness to the havoc mobs have wreaked to red lines before." But the future of blasphemy laws in Pakistan is far from settled.

The laws remain popular in Pakistan, and Prime Minister Imran Khan expressed support for them during the recent election campaign. After the decision on Bibi was announced, the Islamist political party Tehreek-e-Labaik said Saqib and the other judges deserve death under Islamic law.

That drew a sharp rebuke from Khan. “The state will fulfill its responsibility of protecting the lives and properties of people and take strict action against violators," he said in a speech broadcast across the country.