In communist Vietnam, over 4,500 accept Jesus as savior. Country leaders welcomed Franklin Graham and put no restrictions on what he preached 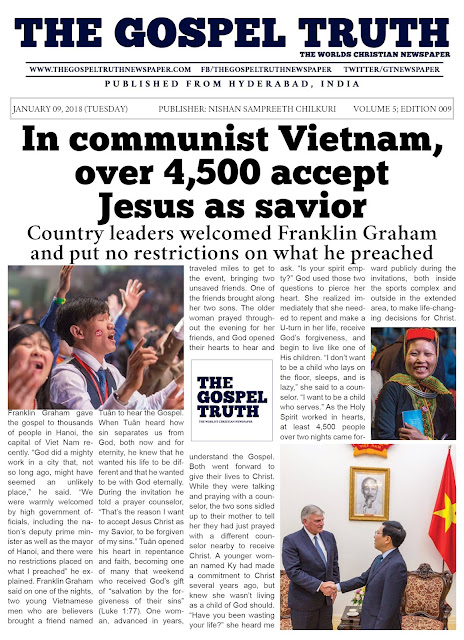 In communist Vietnam, over 4,500 accept Jesus as savior.
Country leaders welcomed Franklin Graham and put no restrictions on what he preached.

Franklin Graham gave the gospel to thousands of people in Hanoi, the capital of Viet Nam recently. “God did a mighty work in a city that, not so long ago, might have seemed an unlikely place,” he said.

“We were warmly welcomed by high government officials, including the nation’s deputy prime minister as well as the mayor of Hanoi, and there were no restrictions placed on what I preached” he explained. Franklin Graham said on one of the nights, two young Vietnamese men who are believers brought a friend named Tuân to hear the Gospel. When Tuân heard how sin separates us from God, both now and for eternity, he knew that he wanted his life to be different and that he wanted to be with God eternally.

During the invitation he told a prayer counselor, “That’s the reason I want to accept Jesus Christ as my Savior, to be forgiven of my sins.” Tuân opened his heart in repentance and faith, becoming one of many that weekend who received God’s gift of “salvation by the forgiveness of their sins” (Luke 1:77).

One woman, advanced in years, traveled miles to get to the event, bringing two unsaved friends. One of the friends brought along her two sons. The older woman prayed throughout the evening for her friends, and God opened their hearts to hear and understand the Gospel. Both went forward to give their lives to Christ. While they were talking and praying with a counselor, the two sons sidled up to their mother to tell her they had just prayed with a different counselor nearby to receive Christ.

A younger woman named Ky had made a commitment to Christ several years ago, but knew she wasn’t living as a child of God should. “Have you been wasting your life?” she heard me ask. “Is your spirit empty?” God used those two questions to pierce her heart. She realized immediately that she needed to repent and make a U-turn in her life, receive God’s forgiveness, and begin to live like one of His children. “I don’t want to be a child who lays on the floor, sleeps, and is lazy,” she said to a counselor. “I want to be a child who serves.”

As the Holy Spirit worked in hearts, at least 4,500 people over two nights came forward publicly during the invitations, both inside the sports complex and outside in the extended area, to make life-changing decisions for Christ.