ALLAH ATTACHED A DEVIL TO EVERY MUSLIM 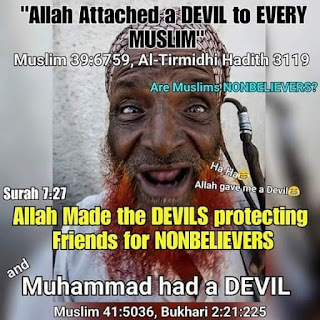 1. Muhammad was operated by Jibril because, SATAN WAS PART OF HIM and Satan was Extracted from him?🤔

2. Muhammad had a Jinn [Satan, Jibril] and the Wife of Abu Lahab knew this?🤔

Allah stated that the Jinns [Satan, Devils] are the PROTECTING FRIENDS of the Non-believers:

"Lo! We have made the devils protecting friends for THOSE WHO BELIEVE NOT" Surah 7:27

The interpretation(Tafsir) of the above Surah

'Lo! he) Iblis (seeth you, he and his tribe) his soldiers, (from whence ye see him not) BECAUSE YOUR BREASTS ARE THEIR DWELLINGS. (Lo! We have made the devils protecting friends) helpers (for those who believe not) in Muhammad (pbuh) AND IN THE QUR'AN. '

*Meaning The Devils indwell only in the Hearts (breast) of the Unbelievers.

Muhammad stated that "Satan runs in the blood of every Muslim, including himself"

Sayyidina Jabir reported that the Prophet said, “Do not visit women whose husbands are not at home, for, 👉THE DEVIL CIRCULATES IN EACH OF YOU AS BLOOD CIRCULATES. They asked, And in you, too? He said, “In ME, TOO,👈 but Allah has helped me over him, so that I am safe.

Narrated 'Ali bin Al-Husain (from Safiya, the Prophet's wife): '' The Prophet replied, "Satan circulates in the human being as blood circulates in the body, and I was afraid lest Satan might insert an evil thought in your minds."

Muhammad then again said "He had a devil or Satan indwelling him.

Muslim Book 41, Number 5036:Narrated Abul Azhar al-Anmari:When the Apostle of Allah went to his bed at night, he would say: in the name of Allah, I have laid down my side for Allah. O Allah! forgive me my sin, 👉DRIVE AWAY MY DEVIL,👈 free me from my responsibility, and place me in the highest assembly.

Muhammad asked Allah to Drive away his devil, because, the Devil used to Harm him:

There were eye Witnesses i. e

The polytheists and the Wife of Abu Lahab who knew Muhammad had a Devil [Satan] who was his good friend:

Gabriel did not come to the Prophet (for some time) and so one of the QURAISH WOMEN SAID, "His Satan has deserted him." So came the Divine Revelation: "By the forenoon And by the night When it is still! Your Lord (O Muhammad) has neither Forsaken you Nor hated you." (93.1-3)

Narrated Jundub bin Sufyan:Once Allah's Apostle became sick and could not offer his night prayer (Tahajjud) for two or three nights. Then a lady (the wife of Abu Lahab) came and said, "O Muhammad! I think that your Satan has forsaken you, for I have not seen him with you for two or three nights!" On that Allah revealed:'By the fore-noon, and by the night when it darkens, your Lord (O Muhammad) has neither forsaken you, nor hated you.' (93.1-3).

Sayyidina Jundub Bajali narrated: I was with the Prophet in a cave when one of his fingers bled. So, the Prophet remarked: Are you but a finger that bleeds in the path of Allah against what you met (The narrator reported that) Jibril did not come to him for some time.

So the polytheists exclaimed, “Muhammad is forsaken. ” But, Allah, the Blessed, the Exalted revealed: Your Lord has not forsaken you, nor is He displeased. (93:3)

Even, Aisha had a DEVIL who Paid her a Visit, Because, Muhammad said "Every Muslim is ATTACHED with a DEVIL"

Muslim Book 039, Number 6759:A'isha the wife of Allah's Apostle, reported that one day Allah's Messenger came out of her (apartment) during the night and she felt jealous.

Then he came and he saw me (in what agitated state of mind) I was. He said: A'isha, what has happened to you? Do you feel jealous? Thereupon she said: How can it he (that a woman like me) should not feel jealous in regard to 👉a husband like you.👈Thereupon Allah's Messenger said: It was YOUR DEVIL WHO HAD COME TO YOU, and she said: Allah's Messenger, is there ALONG WITH ME A DEVIL? He said: Yes. I said: 👉Is devil attached to everyone? He said: Yes.👈I (Aisha) again said: Allah's Messenger, IS IT WITH YOU ALSO? HE SAID: YES, but my Lord has helped me against him and as such I am absolutely SAFE🤔 from his mischief

1. Are the Devils the GIFTS OF ALLAH to every Muslim?

If Allah made the DEVILS protecting friends for the Nonbelievers.Why is Every Muslim including Muhammad attached with a DEVIL?

attached for what means?

2. In the Hadiths, we are told Jibril the angel of Islam, took Satan [the Devil] out of Muhammad through a physical operation:

FIRSTLY it began in his Youthful days:

Muslim Book 1, Number 0311:Anas b. Malik reported that Gabriel came to the Messenger of Allah while he was playing with his playmates.He TOOK HOLD OF HIM and 👉lay him prostrate on the ground👈 and 👉TORE OPEN HIS BREAST and took out the heart from it and then extracted a blood-clot out of it and said👈: THAT WAS THE PART OF SATAN IN THEE.And then he washed it with the water of Zamzam in a golden basin and then it was joined together and restored to it place. The boys came running to his mother, i. e. his nurse, and said: 👉Verily Muhammad has been murdered.👈 They all rushed toward him (and found him all right) 👉His color was changed👈, Anas said. 👉I MYSELF SAW THE MARKS OF NEEDLE ON HIS BREAST.👈

And then, At his Old Age:

Bukhari Volume 4, Book 54, Number 429:Narrated Malik bin Sasaa:The Prophet said, "While I was at the House in a state midway between sleep and wakefulness, (an angel recognized me) as the man lying between two men. A golden tray full of wisdom and belief was brought to me and 👉MY BODY WAS CUT OPEN from the throat to the lower part of the abdomen and then my abdomen was washed👈 with Zam-zam water and (my heart was) filled with wisdom and belief.

Did Jibril used to OPERATE the Previous prophets before Muhammad?

Name one prophet beside Muhammad, Who Jibril extracted Satan from his heart

3. Muhammad said 'Allah just made the devils protecting friends for those who believe not" Surah 7:27

"Every Muslim is Attached with a Jinn"

Meaning, All the Muslims are NONBELIEVERS