ALLAH IS SATAN AND BAPHOMET IS HIS PROPHET 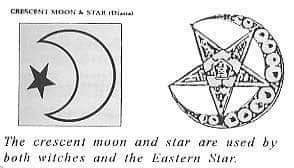 Muslims often contend with Christians that the Quran is the “word of God” and that the Bible is corrupted and cannot be trusted.

If you were Satan the enemy of God and all humanity, what would you do to confuse humanity in which the Word of God has already been given and what would you say?

You would do exactly what Islam is doing and saying. Muslims claim that after God gave the Old & New Testament, there was a need for another book with contrary instructions to the ones God has already given.  Let's ask Muslims  a couple of questions:

# What is a counterfeit?

# Can a person counterfeit money without knowing about the genuine money they’re about to counterfeit?

This applies to Islam whose Quran came 600 years after the completion of the Bible.

Saying the Quran is true and the Bible is false is an impossibility, because a counterfeit cannot exist without having first an original of what’s been counterfeited.

Muslims will argue that men are more powerful than God and were able to corrupt His Word, thus God had to give a new Word (The Quran) which far from "correcting" mistakes contradicts His original Word in thought word and deed through its falsified teachings and doctrine.

Not only the new so called “Word of God” contradicts His Old Word, but His “new prophet” (Muhammad) also contradicts all the prophets before him. He did so in holding a lower morality standard than those prophets mentioned in the Bible, by teaching contrary doctrine from those that came prior to him, by worshipping another god, by not prophesying as the prophets of the Bible did and lastly by being unable to perform signs.

How about Jean Dixon or Nostradamus?

When a person works with Satan knowingly or unknowingly, Satan can safely say tomorrow you will be hit by a blue car at 3:00 PM.  What do you think will happen then?

Satan will orchestrate with his demons that particular event to occur and if the person is without God’s protection, that’s exactly how it will happen. This is the same concerning the Illuminati card game.

When the people react favorably with their agenda and throw God out of their nation, that nation becomes unprotected.

Now, they can tell you what’s going to happen through movies, or by means such as the Illuminati card game, because all they have to do now its follow up by making their prediction happen over a nation or world that lacks the protection of the very God they rejected.

Satan has also his prophets and ministers.

"For there shall arise false Christs, and false prophets, and shall shew great signs and wonders; insomuch that, if it were possible, they shall deceive the very elect."

"For such are false apostles, deceitful workers, transforming themselves into the apostles of Christ.  And no marvel; for Satan himself is transformed into an angel of light.Therefore it is no great thing if his ministers also be transformed as the ministers of righteousness; whose end shall be according to their works."

# WHO REALLY IS ALLAH?

Evidence shows that Lucifer who is Satan is really the Spirit behind Allah. Arabic speakers will argue that Allah is the “Word” for God in the Arabic language.

That may be true since most eastern countries throughout history has had and served many gods, the name for the one god chosen as to be the one true “God” happens to be the name of Satan as “Lucifer”.

The name Allah is derived from the Hebrew Chaldea word Halal which is the NAME OF SATAN in the scriptures in Isaiah 14.12, “How art thou fallen from heaven, O Lucifer (HALAL), son of the morning! how art thou cut down to the ground, which didst weaken the nations!”

Now, the word “Lucifer” means light bearer. Interesting enough the symbol for Islam is the Moon and the star.

Is there any wonder why Allah throughout history has been associated with the moon god?

# WHAT ABOUT THE STAR?

Stars throughout the Old Testament have always been associated with angels. Lucifer is a fallen angel who swore 5 wills against God.

The star represents his fallen angelic nature and the 5 wills against God.  The 5 wills of Lucifer (Satan) is also represented secretly by the 5 pillars of Islam. Pillars represent foundation, and Lucifer’s 5 wills are the foundations of how he is waging war against God and His people.

"I call heaven and earth to record this day against you, that I have set before you life and death, blessing and cursing: therefore choose life, that both thou and thy seed may live:" (Deuteronomy 30:19 KJV)

Isn’t it a coincidence that witches who are unknowingly a branch of Satanism worship the god of force or “the force”?

Could it also be a coincidence that their symbol it’s also a crescent moon and a star?

So now we know Allah is Lucifer in accordance to Isaiah 14:12

“How art thou fallen from heaven, O Lucifer (HALAL), son of the morning! how art thou cut down to the ground, which didst weaken the nations!”

# Did you know that Baphomet is old French for Muhammad?***

Attached is a picture of Baphomet. Can you spot the crescent moon and the-star?

# Did you know that the Knight Templar Shriners who are an Illuminati  branch of the Freemasons are pro Islamic and worship Baphomet which means Mohamed?

# If Islam is not Satanic, then why do we have satanic people, practices, hidden symbols, and meanings all connected in the mix of Islam?

Satan is counting on our ignorance and our unwillingness to search all things. That’s why false religions like Islam and Freemasonry keep their adherents so busy with works & rituals that they won’t have enough time to do anything else.

It is no coincidence that Islam fits Satan's agenda and purposes precisely.

*** "Modern scholars such as Peter Partner and Malcolm Barber agree that the name of Baphomet was an Old French corruption of the name Muhammad, with the interpretation being that some of the Templars, through their long military occupation of the Outremer, had begun incorporating Islamic ideas into their belief system, and that this was seen and documented by the Inquisitors as heresy. Alain Demurger, however, rejects the idea that the Templars could have adopted the doctrines of their enemies. Helen Nicholson writes that the charges were essentially "manipulative"—the Templars "were accused of becoming fairy-tale Muslims." Medieval Christians believed that Muslims were idolatrous and worshipped Muhammad as a god, with mahomet becoming mammet in English, meaning an idol or false god. This idol-worship is attributed to Muslims in several chansons de geste. For example, one finds the gods Bafum e Travagan in a Provençal poem on the life of St. Honorat, completed in 1300. In the Chanson de Simon Pouille, written before 1235, a Saracen idol is called Bafumetz."