How can African natives follow a racist false prophet such as Ellen White? 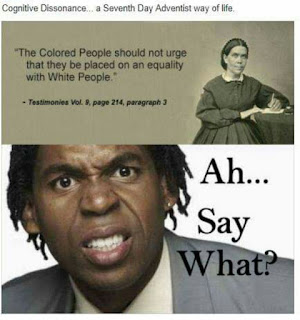 Stephen Baxter wrote: This subject, and Ellen's words regarding this topic, is a perfect example of Adventists bending over backwards to try and explain that Ellen didn't really mean what she actually said.

They choose to live in a perpetual world of cognitive dissonance. Ellen, indeed, believed blacks (Negro race) to be inferior to caucasians. Furthermore, she thought that evangelizing among the blacks was a waste of time.

EGW: "The Colored People should not urge that they be placed on an equality with White People."( Testimonies Vol. 9, page 214)

EGW: "We cannot expect that they ... [Colored People] will be as firm and clear in their ideas of morality." (Testimonies Vol. 9, page 223)

EGW: "No one is capable of clearly defining the proper position of the colored people." (Testimonies Vol. 9, page 213).

EGW "The work of proclaiming the truth for this time is not to be hindered by an effort to adjust the position of the Negro race." (Testimonies Vol. 9, page 214)

EGW: "Slavery will again be revived in the Southern States; for the spirit of slavery still lives. Therefore it will not do for those who labor among the colored people to preach the truth as boldly and openly as they would be free to do in other places. Even Christ clothed His lessons in figures and parables to avoid the opposition of the Pharisees." (Spalding, Magan Collection, page 21 and 2 MR #153, page 300 )

EGW: "God cannot take the slave to heaven, who has been kept in ignorance and degradation, knowing nothing of God, or the Bible, fearing nothing but his master's lash, and not holding so elevated a position as his master' brute beasts. But He does the best thing for him that a compassionate God can do. He lets him be as though he had not been." (Spiritual Gifts, vol. 1, p. 193)

EGW: “God cannot take to heaven the slave who has been kept in ignorance and degradation, knowing nothing of God or the Bible, fearing nothing but his master's lash, and holding a lower position than the brutes. But He does the best thing for him that a compassionate God can do. He permits him to be as if he had not been, while the master must endure the seven last plagues and then come up in the second resurrection and suffer the second, most awful death. Then the justice of God will be satisfied.”

EGW: "You are the children of God. He has adopted you, and He desires you to form characters here that will give you entrance into the heavenly family. Remembering this, you will be able to bear the trials which you meet here. In heaven there will be no color line; for all will be as white as Christ himself. Let us thank God that we can be members of the royal family."

Stephen Baxter: Furthermore...her husband James knew exactly what she was referring to and wholeheartedly endorsed it.

Mrs. White said the results of amalgamation could be seen "in certain races of men." The question that has haunted the SDA Church for more than 150 years is, which races are the result of amalgamation of man and beast?

Ellen White's statement provoked instant controversy and stinging criticism of her in the 1860s forced church leaders to attempt to defend their prophet. In 1868, four years after the amalgamation statements first appeared in print, Adventist leader Uriah Smith5 published his defense of Ellen White. In that book he conjectured that the union of man with beast had created "such cases as the wild Bushmen of Africa, some tribes of the Hottentots, and perhaps the Digger Indians of our own country".

James White "carefully" reviewed Smith's book prior to its publication, and then recommended it in glowing terms to the readers of the church's official magazine, the Review and Herald:

"The Association has just published a pamphlet entitled, 'The Visions of Mrs. E.G. White, A Manifestation of Spiritual Gifts According to the Scriptures.' It is written by the editor of the Review. While carefully reading the manuscript, I felt grateful to God that our people could have this able defense of those views they so much love and prize, which others despise and oppose."

As noted, the prophet's husband carefully read Smith's book. It is inconceivable that the statements about the Bushmen of Africa passed by James White without notice. His endorsement of the book indicates his implicit approval of the explanation. In fact, because it supposedly established Mrs. White's claims, James and Ellen took 2,000 copies of Smith's book with them to peddle at camp meetings that year! By promoting and selling Smith's book the Whites placed their stamp of approval on his explanation of the amalgamation statement.

7. Among the Colored People"

As a so-called prophet of God, what she SHOULD have been promoting is integration and equality as Jesus taught.

Our Lord taught, "Love thy neighbor" and illustrated it by telling the parable of the good Samaritan who BTW were seen as inferior by the Jews just as whites did of blacks in her time.

She taught, don't ruffle feathers. Get along to go along or else it will hurt the church. Her church was her priority.