Court supports Muslims’ opposition to construction of church in Zanzibar A court on the semi-autonomous island of Zanzibar, off the coast of Tanzania, ruled on July 20 that a church cannot continue constructing a worship building it has tried to finish for eight years, sources told Morning Star News. Hard-line Muslims outside Zanzibar City have been fighting construction of the Pentecostal Assemblies of God building since 2009, having demolished the partially built structure twice before then. They claim the party that sold the property to the church was not the rightful owner.

THREAT FOR THE SURVIVAL OF THE CONGREGATION Christians believe the court on the overwhelmingly Muslim island acted out of religious bias. A previous court ruling allowed construction to go forward. Pastor Amos Lukanula of the Pentecostal Assemblies of God church said last week’s ruling has serious implications for the survival of congregation on the island, and that the church plans to appeal to the High Court of Zanzibar. “Our church members have persistently worked alongside with me and are frustrated and weary, but we are always hopeful that God will still intervene,” Pastor Lukanula said. “We cannot allow the Muslims to put up a mosque in place of the church.”

PROBLEMS SINCE 2009 The case has dragged on for more than eight years as the area Muslims have forced the church in Chukwani to incur legal costs of $100 per month in an effort to take over its property, sources said. Pastor Lukanula said the court had been waiting for the church to fail to attend the monthly court hearing in order to rule against it on a technicality. The church purchased the property in 2004 and began putting up a temporary structure, but the area Muslims pulled it down. The church then spent three years putting up a semi-permanent structure, which the hard-line Muslims also destroyed, sources said.   Pastor Amos Lukanula, his wife, and church members in Zanzibar. / MSN After a third structure of stone blocks was half-way finished in 2009, the Muslims stopped construction with a court order until the legal dispute could be resolved. This forced the church to raise 5.7 million Tanzanian shillings, more than US$2,500, to fight the case in court, with an attorney from mainland Tanzania traveling to Zanzibar each month at a cost of $100 per visit.

TRIALS FOR THE OWNERSHIP “We bought the land from Harun Gikaro Wanzo, who passed on in 2009, and now his widow is the one remaining who has a small piece of land,” Pastor Lukanula said, saying the church has allowed Wanzo’s widow, Annah Philippo Barihuta, to remain living on the premises. 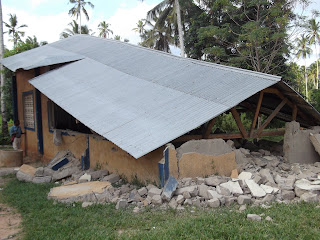 “Now she might too lose that land, and she has several children to take care of. We appeal for support and prayers as we appeal for justice to be done.” On Feb. 21, 2011, a lower court ruled in favor of the church, which then continued with construction. But after the death of Amina Binti Saleh, the seller of the property to Wanzo, area Muslims and Saleh’s daughter, Jilubai Binti Saleh, filed another appeal to stop construction in 2011.

The Muslims claimed that Saleh’s son, Sadik, was not the blood son of her late husband, Abdul Shakar, and hence did not have the right of ownership of the land that was sold to Christians. They held that Saleh’s daughter, Jilubai Binti Saleh, had been the rightful heir.

In the church’s bid to show that Barihuta’s late husband, Wanzo, had the right to sell the land to the church, the impoverished widow and her family have borne much of the costs of the court case. Barihuta is a member of the church.

The Muslims claimed in court that Barihuta invaded Saleh’s land in 2004 and uprooted 20 coconut trees, then put up a house illegally, and that in 2007, Pastor Lukanula illegally put up the church building within a residential area and destroyed trees worth 2 million Tanzanian shillings (US$885).
See more: http://evangelicalfocus.com/world/2755/Court_supports_Muslims_opposition_to_building_church_in_Zanzibar
at July 07, 2018