Pastor who was arrested in North Korea, shared the gospel with prison officials 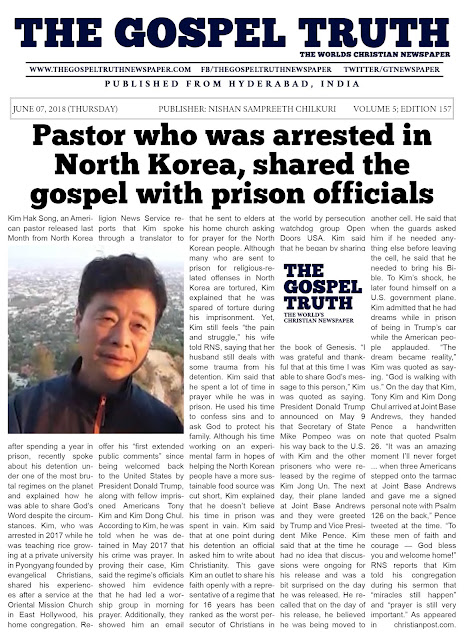 Pastor who was arrested in North Korea, shared the gospel with prison officials.


Kim Hak Song, an American pastor released last Month from North Korea after spending a year in prison, recently spoke about his detention under one of the most brutal regimes on the planet and explained how he was able to share God's Word despite the circumstances.

Kim, who was arrested in 2017 while he was teaching rice growing at a private university in Pyongyang founded by evangelical Christians, shared his experiences after a service at the Oriental Mission Church in East Hollywood, his home congregation.

Religion News Service reports that Kim spoke through a translator to offer his "first extended public comments" since being welcomed back to the United States by President Donald Trump, along with fellow imprisoned Americans Tony Kim and Kim Dong Chul. According to Kim, he was told when he was detained in May 2017 that his crime was prayer.

In proving their case, Kim said the regime's officials showed him evidence that he had led a worship group in morning prayer. Additionally, they showed him an email that he sent to elders at his home church asking for prayer for the North Korean people. Although many who are sent to prison for religious-related offenses in North Korea are tortured, Kim explained that he was spared of torture during his imprisonment. Yet, Kim still feels "the pain and struggle," his wife told RNS, saying that her husband still deals with some trauma from his detention.

Kim said that he spent a lot of time in prayer while he was in prison. He used his time to confess sins and to ask God to protect his family. Although his time working on an experimental farm in hopes of helping the North Korean people have a more sustainable food source was cut short, Kim explained that he doesn't believe his time in prison was spent in vain.

Kim said that at one point during his detention an official asked him to write about Christianity. This gave Kim an outlet to share his faith openly with a representative of a regime that for 16 years has been ranked as the worst persecutor of Christians in the world by persecution watchdog group Open Doors USA.

Kim said that he began by sharing the book of Genesis. "I was grateful and thankful that at this time I was able to share God's message to this person," Kim was quoted as saying. President Donald Trump announced on May 9 that Secretary of State Mike Pompeo was on his way back to the U.S. with Kim and the other prisoners who were released by the regime of Kim Jong Un.

he next day, their plane landed at Joint Base Andrews and they were greeted by Trump and Vice President Mike Pence. Kim said that at the time he had no idea that discussions were ongoing for his release and was a bit surprised on the day he was released. He recalled that on the day of his release, he believed he was being moved to another cell.

He said that when the guards asked him if he needed anything else before leaving the cell, he said that he needed to bring his Bible. To Kim's shock, he later found himself on a U.S. government plane. Kim admitted that he had dreams while in prison of being in Trump's car while the American people applauded. "The dream became reality," Kim was quoted as saying. "God is walking with us." On the day that Kim, Tony Kim and Kim Dong Chul arrived at Joint Base Andrews, they handed Pence a handwritten note that quoted Psalm 26. "It was an amazing moment I'll never forget ... when three Americans stepped onto the tarmac at Joint Base Andrews and gave me a signed personal note with Psalm 126 on the back," Pence tweeted at the time. "To these men of faith and courage — God bless you and welcome home!"

RNS reports that Kim told his congregation during his sermon that "miracles still happen" and "prayer is still very important." As appeared in christianpost.com.