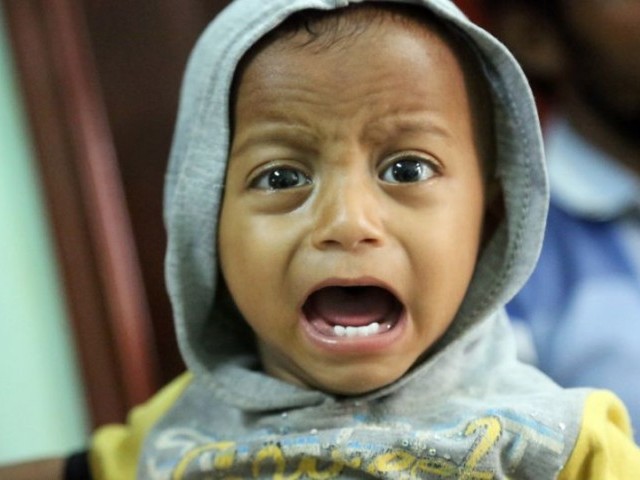 A Yemeni child suspected of being infected with cholera cries at a hospital in the coastal city of Hodeida. PHOTO: AFP
SANAA: The number of suspected cholera cases in war-torn Yemen has reached one million, the International Committee of the Red Cross said on Thursday.
“Yemen suspected cholera cases has reached the threshold of one million, amplifying the suffering of the country caught up in a brutal war,” the ICRC said on its Yemen Twitter account.
The World Health Organization warned in November that some 2,200 people have already died from the waterborne disease, which has propagated rapidly due to deteriorating hygiene and sanitation conditions.
40,000 children in war-torn Yemen have died of starvation this year, says aid group
Marc Poncin, the emergency coordinator for Doctors Without Borders (MSF) in Yemen, told AFP that cholera mortality rates had been on a downtrend in recent months but that the disease was far from vanquished.
“The vibrio is a very resistant bacteria that can survive in water for a very long period of time,” Poncin said, warning that next year’s rainy season could bring an uptick.
“As soon as there is a favourable situation for its increase then it’s there,” he added.
Yemen is in the midst of a bloody war between pro-government forces backed by a Saudi-led coalition and Houthi rebels who control the capital.
34 dead, 2,000 sick with suspected cholera in Yemen: WHO
Coalition air raids killed 43 Houthi fighters in the Red Sea province of Hodeida in the past day alone, amid a push by pro-government forces to advance toward a key port there, medical and military sources said.
Saudi Arabia and its Arab allies intervened in the conflict on the side of the government in 2015 with air strikes and a far-reaching blockade on its neighbour’s air and sea ports.
In early November, the coalition tightened that blockade in response to a missile fired by the Houthis that was intercepted near Riyadh airport.
At the time, the UN aid chief warned the move would exacerbate an already dire humanitarian situation.
Saudi-led coalition responsible for ‘worst cholera outbreak in the world’ in Yemen – researchers
The blockade was partially lifted three weeks later under massive international pressure, namely over the closure of Hodeida port – key to humanitarian and commercial deliveries.
The Iran-backed Houthis on Tuesday conducted another failed missile strike against Riyadh to mark the 1,000th day since the Saudi-led intervention.
The coalition said in a statement Wednesday that it would not resort to closing rebel-held Hodeida in the wake of the attack.
More than 8,750 people have been killed since Saudi Arabia and its allies joined the government’s fight against the rebels, triggering what the UN has called the world’s worst humanitarian crisis.
Read more: cholera , Latest , Yemen
at December 25, 2017