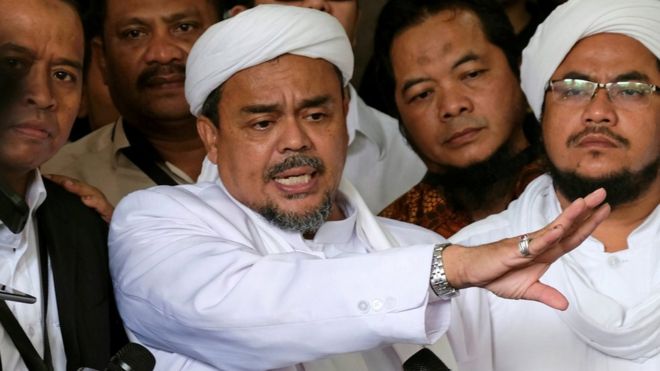 Indonesian police have named a controversial hardline Muslim preacher as a suspect in a pornography case.
Rizieq Shihab is accused of exchanging graphic messages and nude pictures in text conversations with a woman.
The cleric, who is currently in Saudi Arabia, has denied the accusations.
Mr Rizieq heads the Islamic Defenders Front (FPI), which led mass protests against Jakarta's former governor Basuki Tjahaja Purnama who was jailed for blasphemy last month.
Known for his fiery rhetoric, Mr Rizieq has been jailed twice for violence and disrupting public order.
In this latest case, Mr Rizieq is accused of violating Indonesia's strict anti-pornography laws by transmitting pornography to activist Firza Husein, who has also been named as a suspect.
Screenshots of what appeared to be text and picture messages between the two of them began circulating online earlier this year.

It's being seen by many as the height of hypocrisy. This is a man whose group's core battleground has been against sexual promiscuity, prostitution and alcohol.
His group campaigned for the very laws that their leader is now being charged under, the controversial anti-pornography laws.
To his supporters, Rizieq Shihab is a hero who embodies the true face of Islam. Now he is being charged with transmitting pornographic content with a woman who is not his wife.
Some legal experts have questioned why the police are pursuing this particular case. He faces six other charges including defaming the country's founding principles and first president, and blasphemy against Catholicism for questioning whether Jesus was really the son of God.
Police have repeatedly summoned Mr Rizieq for questioning since April, but he has yet to report to them. The preacher has been in Saudi Arabia with his family since late April.
An FPI spokesman told Reuters that the legal complaints were "unfounded" and "engineered to criminalise" clerics.
Mr Rizieq's lawyer has also said the allegations were fabricated by supporters of Mr Purnama, also known as Ahok.
Mr Rizieq is known to be a vocal opponent of Mr Purnama.
He and the FPI campaigned for months last year against Mr Purnama, a Christian and ethnic Chinese, claiming that he could not lead Muslims.
When Mr Purnama addressed these claims in a speech while campaigning for Jakarta's mayoral election, he was accused of insulting Islam, prompting even larger protests.
He was subsequently tried and found guilty of blasphemy.
at June 06, 2017