Doctors Who Let Christian Die Were Fasting for Ramadan… 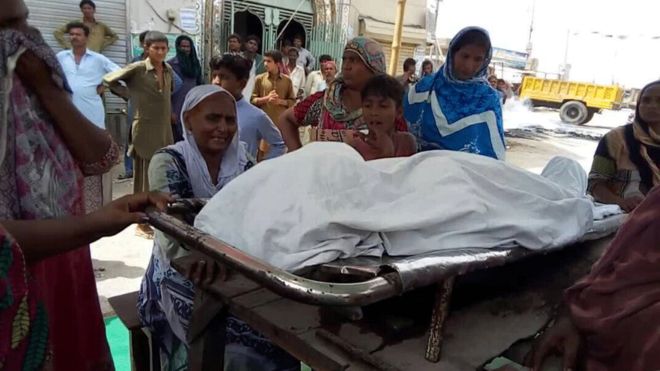 Irfan Masih was clearing a blocked sewer in Pakistan's Sindh Province when he was overcome by toxic fumes. The 30-year-old, who is Christian, died in hospital. His family say that doctors initially refused to treat him and allege he is a victim of growing discrimination from the Muslim majority. The BBC's Riaz Sohail in Umarkot and M Ilyas Khan in Islamabad report.
When Irfan Masih was sent with two colleagues to clear a sewer that had been blocked for four months on Chhor road in Umarkot town, he could not have foreseen that his life was about to end.
His cousin Pervez, a sanitary worker like Irfan, said he was heading to work on 1 June when he heard about the incident.
"I rushed straight to the spot where some people were gathered. They had already pulled out Shaukat Masih, who was unconscious. I helped bring out Yaqoob and Irfan."
Shaukat Masih had been sent down to rescue the two. Irfan was deepest down the sewer well.
"Irfan was breathing, sometimes choking a bit. I lifted him on my shoulder and started running towards the hospital when an auto rickshaw pulled over to help me carry him.
The Taluka Headquarters Hospital in Umarkot is a small one, with only one emergency room where all three were taken. Six doctors deal with 600 outpatient and emergency cases every day.
One doctor came in, looked at Irfan and told the ward boy to clean him, Pervez Masih said. "I pleaded with him that Irfan was seriously ill and he must examine him right away. But he said he was fasting [for Ramadan], and that Irfan was covered in sewage filth. He went away."
After some time, the hospital's chief doctor arrived, he says, followed a while later by another. Neither doctor tended to the injured sanitary worker, although Pervez Masih says the second doctor told the ward boy to put him on oxygen.
"The ward boy did not wash Irfan as he was told. He continued to try to insert a cannula in Irfan's wrist but couldn't find a vein.
"All this while, I was fretting and pleading with one member of staff after another to attend to Irfan. Then I cleaned his face a bit and put my mouth on his mouth and nose and blew in to revive him.
"All this time, Irfan was breathing. Occasionally a shiver would run down his body, like someone having an epileptic fit.
"We must have been there for half an hour before he died. The last time I breathed into his mouth and nose, he pulled in a deep breath and choked a little."
It was only then that the ward boy brought the oxygen and put the mask on his mouth, he said, but there did not appear to be any oxygen in the cylinder. Minutes later a fourth doctor, Hanif Aresar, came in.
"He didn't mind the filth, just went down and embraced him and turned him on his stomach, and back on his back, and tried to resuscitate him manually. Then he said it was no use. Irfan was gone. "
Irfan was Christian, like most sanitary workers in Pakistan. Some low-caste Hindus also do the job, but Muslims avoid this work because they see it as beneath them.
Christians also face discrimination in this Muslim-majority nation. So too do Hindus, but in Umarkot there is a Hindu population of half a million, making them an influential group. There are only a small number of Christians, however, and they have no meaningful representation in the local government.

Who are Pakistan's Christians?

Dr Jam Kumbhar, the chief of the hospital, denies allegations that doctors refused to touch the three workers unless they were washed or that one said he was fasting (with the possible implication that he was short-tempered as a result).
He says Irfan Masih "was already dead when they brought him in," despite his cousin Pervez's detailed account of the man's last moments.
"I am a Muslim and a doctor, and part of our training is to understand that all patients are equal and we must not entertain prejudice against anyone," Dr Kumbhar told the BBC.
"I did not utter these words, nor did I hear any other doctor say that he was fasting and that he would touch the patient only after the patient was given a bath."
The BBC asked to see the entry register which lists each patient brought in to the emergency room and their medical condition. Dr Kumbhar said they couldn't find it because it had been taken away by local Christians.
Local journalist Nahid Hussain Khatak, who reached the hospital about 10 minutes after Irfan Masih, corroborates much of Pervez Masih's account.
"He had been seen by the doctors. If they thought he was dead, why would they put a cannula in his arm or give him oxygen?"
A picture taken by Pervez Masih appears to show his brother with a cannula in his arm.
Dr Kumbhar accused the Christians of turning violent.
"They were armed with sticks and were also carrying acid in bottles. They broke things at the hospital. The lives of the doctors were in danger."
The hospital administration has made a formal request to the authorities to lodge a case of terrorism against 13 members of the Christian community.
Nahid Hussain Khatak says the violence alleged "wasn't even a fraction of what the hospital administration have said".
"Someone opened the fridge in the emergency room and found it stocked with fruit (for doctors and paramedics to eat after their fast) instead of medicine, and pulled it to the ground. They smashed up a couple of tables but it was over in minutes as everybody stormed out to hold a protest."
Far from going after the Christian protesters, police are investigating the three doctors at the hospital who are accused of negligence and involuntary homicide. Dr Kumbhar was arrested and released on bail.
Pressure for a police complaint mounted when the Christian community staged their demonstration, attracting media attention.
Pervez Masih does admit he and others were angry.
"I lost my mind. Shaukat and Yaqoob were also in a serious state. So there was mayhem in the emergency room. Someone pulled down a refrigerator, a table or two were overturned, some windowpanes were broken."
But he says they left with Irfan Mashi's body when police told them to calm down.
"We took the dead body straight to the town square where we staged a sit-in for seven hours, and left only after the district administration high-ups assured us that justice would be done."
It was this anger, he believes, that convinced police to lodge a complaint against the three doctors, and that convinced the hospital staff to immediately arrange to transfer the two other Christian men to hospitals in Hyderabad and then Karachi.
"Shaukat has revived, but Yaqoob is still in a serious condition," Pervez says.
Locals say at least two other Christian sanitary workers lost their lives cleaning the same sewer three years ago.
Mir Hasan Aresar, a columnist and social worker, says there have been examples of intolerance towards minorities in this area. "Tolerance is diminishing, and it's worrying," he said.
The government has announced compensation of a million rupees ($15,000, £12,200) to the family of Irfan Masih, but his mother, Arshad Bibi, is not content.
"I want justice. I want the doctors to be punished so that this doesn't happen to another poor family."
His father, Nazeer, said the first doctor did discriminate against Irfan and the others.
"He said he was fasting, and the patients were dirty. His clothes would get soiled, he said. He asked us to wash the patients before he could treat them.
"They hate us. They don't allow us to sit next to them because we are sweepers. The politicians came here because the case was highlighted in the media. Otherwise, no-one bothers."
at June 12, 2017