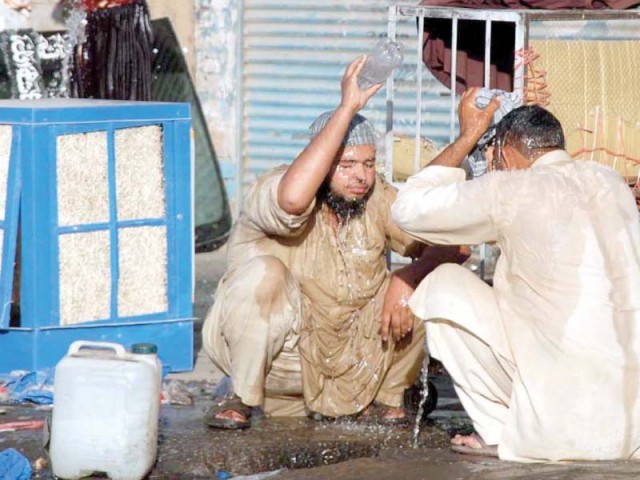 PESHAWAR:
As the mercury hovers around the 43 degrees Celsius mark and the fasting month of Ramazan now underway, health experts have urged the people to avoid going outside during the day when the temperature is high.

They stated that the ongoing heat wave, which has already seen Turbat break its record for the highest temperature, could lead to serious problems for people venturing outdoors such as heat stroke among adults apart from diarrhoea among children.
“We have been receiving a large number of patients with heat stroke and diarrhoea and children seriously need to be protected against the heat wave,” Lady Reading Hospital (LRH) Medical Director Dr Khalid Masood said, adding that the majority of heat wave victims they receive were children.


On Monday night, a large number of people were observed carrying their children to the LRH accident and emergency department. Some faced other problems but most of the children had been brought to the facility seeking treatment for diarrhoea.
“Yes they were exposed to sunlight but it [diarrhoea] happened due to suffocation since the power supply had been suspended for hours in our neighbourhood,” said 44-year Rahimullah Shah, a resident of Jamil Chowk area who had brought his two children to LRH immediately after Iftar.
Shah stated that he was at work when he received a call from his home that his four-year-old twins Naeem and Saleem were both vomiting. He added that the children were first rushed to a local dispenser who suggested that the children had diarrhoea and required treatment available at the LRH.
The experts added that parents must avoid giving juices to their children since it can possibly cause diarrhoea since the quality of all the additives is not known. However, juicy fruits should be provided to kids while adults should also increase their liquid intake along with dates at Sehr and Iftar.
Heat is on: No respite from load-shedding in Ramazan
“Date should be permanently available since it provides you glucose for a long time and usually it is the glucose level which drops down and leading to serious problems,” Dr Masood said.
He added that pregnant women should ensure maximum intake of liquids and dates while both men and women must have yoghurt and milk at Sehri and Iftari.
Dr Masood though urged people to stay away from roasted food items such as chicken, karahi and other oily items.
Published in The Express Tribune, May 31st, 2017.
Read more: Health experts , heat , Latest
at June 06, 2017