Muslims Are Taking Countless Africans As Slaves, Starving Them To Death, Selling Them And Taking The Women To Rape Them 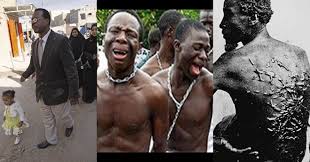 Muslim smugglers are taking countless Africans as slaves, with many instances of people being starved to death and women being raped. Under Gaddafi, blacks in Libya were protected, but as soon as he was toppled, the Libyans began to enslave them and put them in cages. This was all thanks to American policy, a policy that I fear is continuing unchanged.  As we read in one report:

Large numbers African migrants, mostly from Nigeria, Senegal and Gambia, are being traded in slave markets, with many subjected to sexual exploitation and others left to starve in Libya, a United Nations agency has said.
The International Organisation for Migration says West African migrants have recounted being bought and sold in garages and car parks in the southern city of Sabha, one of Libya’s main migrant smuggling hubs.
They are traded for between $200 and $500 and are held on average for two or three months.
Othman Belbeisi, head of the IOM’s Libya mission, told journalists in Geneva: “Migrants are being sold in the market as a commodity.
“Selling human beings is becoming a trend among smugglers as the smuggling networks in Libya are becoming stronger and stronger.”
The migrants are captured as they head north towards Libya’s Mediterranean coast, where some try to catch boats for Italy.
Armed groups and smuggling networks often try to extort money in exchange for allowing migrants to continue, and most of those seized are used as day labourers in construction or agriculture. Some are paid and others are forced to work without pay.
“About women, we heard a lot about bad treatment, rape and being forced into prostitution,” Belbeisi said.
The IOM said it had spoken to one Senegalese migrant who was held in a Libyan’s private house in Sabha with about 100 others, who were beaten as they called their families to ask for money for their captors.
He was then bought by another Libyan, who set a new price for his release.
Some migrants who cannot pay their captors are reportedly killed or left to starve to death, and when migrants die or are released, others are purchased to replace them, the IOM said.
Migrants are buried without being identified, with families back home uncertain of their fate.
“What we know is that migrants who fall into the hands of smugglers face systematic malnutrition, sexual abuse and even murder,” Mohammed Abdiker, IOM’s Director of Operations and Emergencies, said in a statement. “We are hearing about mass graves in the desert.”
Libya is the main gateway for migrants attempting to reach Europe by sea, with more than 150,000 people making the crossing in each of the past three years.
So far this year an estimated 26,886 migrants have crossed to Italy, over 7,000 more than during the same period in 2016. More than 600 are known to have died at sea, while an unknown number perish during their journey north through the desert.