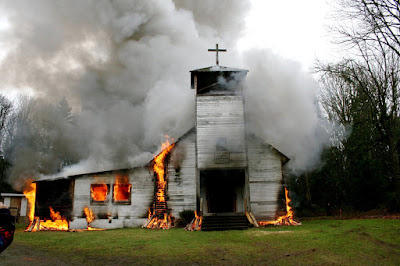 The Resident Magistrate of Bukoba Kagera region in Tanzania, Victor Biambo, has sentenced three men to life imprisonment for the offenses of conspiracy

to burn various churches in the region.

The Government Prosecutor, Emmanuel Manyere, said, despite the verdict, the three men still face with another accusation of cutting the throat with the killing of 16 people which continues in the Supreme Court in the Bukoba region.

Manyere said the three men, namely, Allyu Dauda,​​Rashid Mzee and Ngesela Keya appeared in Resident Magistrate's Court in front of Magistrate of Bukoba, Victor Biambo. He said the accused unanimously found guilty of conspiracy to burn 16 churches of various denominations in the region.

Magistrate Bigambo satisfied with the evidence from the complainants and to imprisonment for seven years in jail for all three of the offense of conspiracy and life imprisonment for the crime of burning churches.

Meanwhile, the Kagera Region PoliceCommander, Augustine Ollomi praised the court to exercise justice in this case as well as urging the country to continue to cooperate with the police to put an end to such practices.

Despite the judgment in this case the number 67,still three men are charged with the murder of 20people in various locations in the region going to the Supreme Court, Bukoba region.
at November 25, 2017