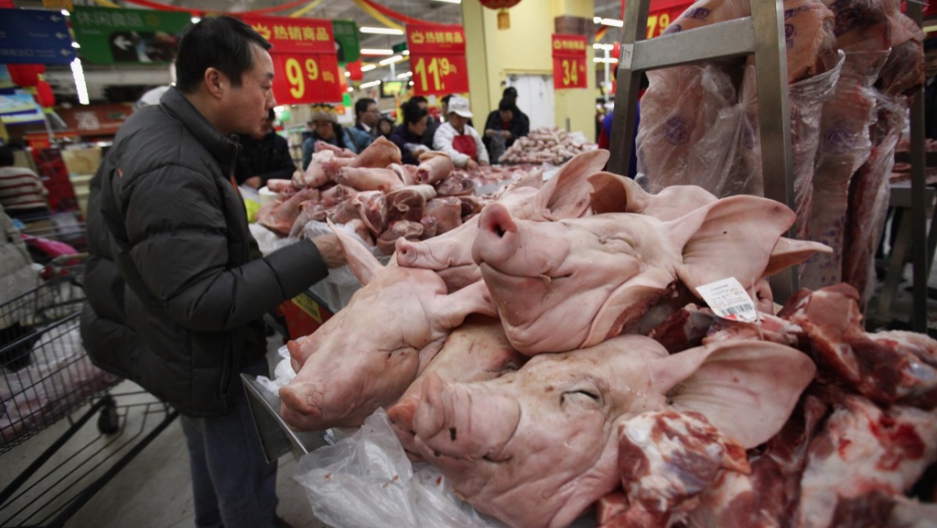 WASHINGTON, DC — The communist regime of Chinese President Xi Jinping has burned down Christian crosses at various churches and is forcing Muslim Uighurs to eat pork as part of its efforts to impose atheist values on everyone in the country, some U.S. government and independent analysts indicate.

During a discussion on religious persecution in China hosted by the Heritage Foundation on Friday, Bob Fu, the founder and president of the U.S.-based Christian human rights group China Aid, noted that Chinese Communist oppression is high in the Muslim-majority province of Xinjiang, home to the country’s Uighur (or Uyghur) minority.
He also pointed out that China’s religious freedom oppression is affecting Christians in the country, particularly those in the city of Wenzhou in Zhejiang province, known as the Jerusalem of China.
In Xinjiang province, communist party officials are “mandated to force themselves and stay in every household of Uighur families from two to five days every month” to monitor their activity and ensure they are loyal to the government, Fu noted.
China is sending Uighurs suspected of Islamic extremism and political dissent to “mind transformations centers,” Fu said.
“Many” of the Uighurs sent to the centers are “forced to even eat pork,” the China Aid president proclaimed, further adding that in the camp prisoners “are mandated to wear specially designed earphones and [listen] to 24 hours of propaganda from the communist party.”
“Many went into insanity,” Fu also said. “It’s happening right now.”
China is monitoring “every inch” of Xinjiang, pointed out Fu, a Christian refugee who fled China after Beijing imprisoned he and his wife for two months for “illegal evangelism” in 1996.
The human rights lawyer revealed that communist authorities in the city of Wenzhou “forcibly burned” and “demolished” “2,000 crosses,” adding the country’s judicial system sentenced some pastors affiliated with the affected churches “to 13, 10 years imprisonment.”
Echoing Fu, Kristina Arriaga, the vice chairwoman of the U.S. Commission on International Religious Freedom (USCIRF), confirmed that the Xi administration is taking down crosses from churches across China.
“Just earlier this year the Golden Lampstand Church was demolished and Chinese officials as was mentioned earlier have taken down crosses religions iconography from churches and from villages,” Arriaga declared.
“Incredibly, the Chinese government persecution goes beyond property damage,” she continued, noting that communist authorities routinely harass and imprison Christians.
In what appears to be an effort to expand its control of religion, the atheist Xi regime intends to make the country’s religious groups more “Chinese,” reported Newsweek in October 2017.
During the Communist Party conference, held every five years, President Xi reportedly indicated “that all religions must be ‘Chinese-oriented,’ as part of his effort to ‘Sinicize religion,’ or make it more Chinese, by instilling socialist core values.”
at April 14, 2018