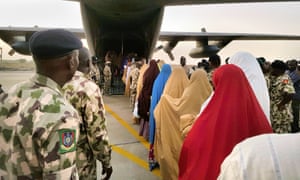 The only Christian among the 110 schoolgirls abducted last month by Boko Haram ran away from her kidnappers but was caught and brought back three days later, according to fellow captives speaking in their first face-to-face interview since they were returned to their families last week.
Leah Sharibu is the only one of the Dapchi girls that Boko Haram refused to hand over after negotiations with the Nigerian government, apparently because she refused to renounce her faith and convert to Islam. She is still held by the group.
Kidnapped by a militant group that has killed tens of thousands and displaced millions across north-east Nigeria and the surrounding region, the girls’ extraordinary bravery shines through their testimony.
Speaking to the Guardian from their homes in Yobe state, the girls who had to leave their friend behind described how Leah and two others escaped together.
“She didn’t tell us she was leaving,” said Aisha Ibiwa. “We thought she was just going round the corner, but she sneaked out along with Maryam and Amira [two classmates].”
After walking for three days, the three hungry and exhausted girls approached a family of the nomadic Fulani people, asking for their help getting home to Dapchi. But instead they were taken straight back to their kidnappers, according to Hajara Adamu, another of Leah’s friends.
“The Fulani man said to them: ‘So you are the missing girls that we’ve heard about on the radio.’ He gave them a jerrycan filled with cow’s milk and brought them back,” Hajara said.
“Leah and her group weren’t flogged. They [Boko Haram] said it was because they had suffered a lot while trying to escape.”
Hajara had worse luck: when she tried to run away, she was whipped. She was frogmarched back to the camp with a gun at her back, after making the mistake of asking some local women for directions.
“They started laughing at us and even insulting us, saying that we wanted to go back to the land of unbelievers,” Hajara said. 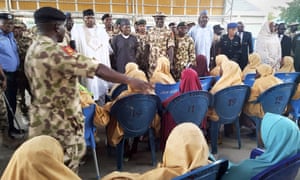