Hamas is paying $500 to Muslims in Gaza border protests to get shot by the IDF, $3000 to family if they’re killed

“War is deceit,” said Muhammad. The “Palestinian” victimhood propaganda industry has always been short of actual victims, and so has become quite adept at manufacturing atrocities, with willing help from the international media. 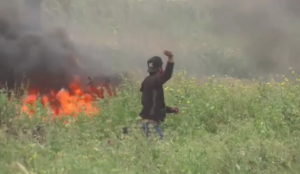 “Hamas Paying Gazans to Get Shot by IDF,” Jewish Press, April 5, 2018 (thanks to The Religion of Peace):

Hamas needs victims and is willing to pay for them.
Hamas has set payment rates for protesters along the Gaza border to incentivize them into getting shot.
Gazans who are shot and seriously wounded will receive $500.
If they’re lucky enough to have been killed during the protests, the family will receive $3000, according to a report by Channel 10’s Alon Ben-David. That’s a lot of money in Gaza.
According to reports, Hamas has already begun making payments.
So much for planning a “peaceful” protest….