CHRISTIANITY IS THE OLDEST FAITH IN AFRICA 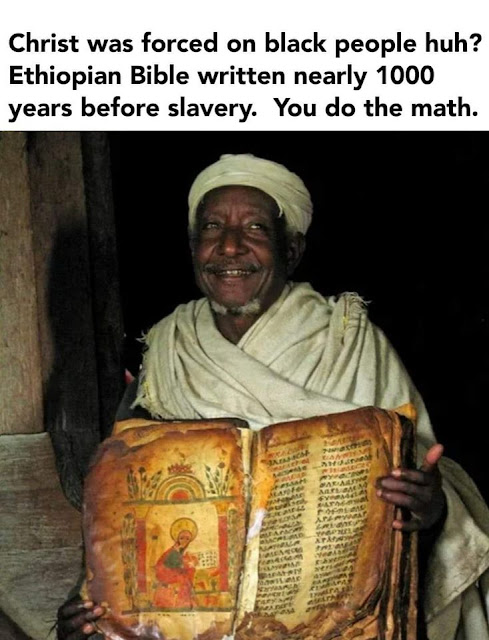 CHRISTIANITY IS THE OLDEST FAITH IN AFRICA
Many Africans already knew Christ way before slavery. In fact, it was Simon the Cyrene (Cyrene today is Libya) who helped Jesus carry the cross 2000 years ago. Not long after, Christianity hit Ethiopia when Philip the Apostle spread the gospel of Jesus Christ to an Ethiopian eunuch/high official.
1278 years before slavery in the year 341, Ezana the Ethiopian King officially named Ethiopia a Christian nation.
The name of Jesus lasted 1500 years later thru slavery, and still lives on today. You can't "force" Faith. Just ask Harriet Tubman who found Jesus in visions and heard His voice in prayers.
Ask Frederick Douglas who found his Faith in Christ as “Redeemer, Friend, and Savior" once he decided to cast all of his cares upon Him. So to those who continue to walk in the ignorance of believing that Jesus was "forced" on us, stop believing every article you read.
When you mention "research", make sure you're researching real facts rather than feeding your non-belief with real lies that are based on the opinions of another man.
Shalom
at June 21, 2020