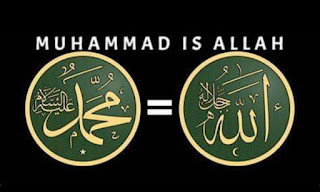 MOHAMMED IS IN THE HOLDING CELL OF HELL

THE LAKE OF FIRE IS THE FINAL JUDGMENT

I CAN PROVE IT FROM THE WORD OF GOD

14. And death and hell were cast into the lake of fire. This is the second death.

15. And whosoever was not found written in the book of life was cast into the lake of fire.

The outline below contains the answers to the very questions Muhammad did not want his followers to know. Namely that Islam is a sanitized version of ancient polytheistic moon worship which he invented to exercise military control.

Does the Qur’an define the word “Allah”? No.

Was the name “Allah” revealed for the first time in the Qur’an? No

Does the Qur’an assume that its readers have already heard of “Allah”? Yes

Should we look into pre-Islamic Arabian history to see who “Allah” was before Muhammad? Yes.

According to Muslim tradition, was Muhammad born into a Christian family and tribe? No

Was he born into a Jewish family or tribe? No

What religion was his family and tribe? Pagans

What was the name of his pagan father? Abdullah (Abd + Allah)

Did Muhammad participate in the pagan ceremonies of Mecca? Yes

Did the Arabs in pre-Islamic times worship 360 gods? Yes

Did the Pagan Arabs worship the sun, moon and the stars? Yes

Did the Arabs build temples to the Moon-god? Yes

Did different Arab tribes give the Moon-god different names/titles? Yes

What were some of the names/titles? Sin, Hubul, Ilumquh, Al-ilah.

Was the title “al-ilah” (the god) used of the Moon-god? Yes

Was the word “Allah” derived from “al-ilah?” Yes

Was the pagan “Allah” a high god in a pantheon of deities? Yes.

Was he worshipped at the Kabah? Yes.

Was Allah only one of many Meccan gods? Yes

Did they place a statue of Hubul on top of the Kabah? Yes.

At that time was Hubul considered the Moon-god? Yes.

Was the Kabah thus the “house of the Moon-god”? Yes.

Did the name “Allah” eventually replace that of Hubul as the name of the Moon god? Yes.

Did they call the Kabah the “house of Allah”? Yes

Did the pagans develop religious rites in connection with the worship of their gods? Yes.

Did the pagans practice the Pilgrimage, the Fast of Ramadan, running around the Kabah seven times, kissing the black stone, shaving the head, animal sacrifices, running up and down two hills, throwing stones at the devil, snorting water in and out the nose, praying several times a day toward Mecca, giving alms, Friday prayers, etc.? Yes.

Did Muhammad command his followers to participate in these pagan ceremonies while the pagans were still in control of Mecca? Yes (Yusuf Ali, fn. 214, pg. 78).

Were al-Lat, al-Uzza and Manat called “the daughters of Allah”? Yes.

Have those verses been “abrogated” out of the present Qur’an? Yes.

What were they called? “The Satanic Verses.” Yes.

Was the crescent moon an ancient pagan symbol of the Moon-god throughout the ancient world? Yes.

Was it the religious symbol of the Moon-god in Arabia? Yes

Were stars also used as pagan symbols of the daughers of Allah? Yes

Did the Jews or the Christians of Arabia use the crescent moon with several stars next to it as symbols of their faith? No

Did Islam adopt the pagan crescent moon and stars as it religious symbol? Yes.

As Islam developed over the centuries, did it adopt pagan names, pagan ceremonies, pagan temples and pagan symbols? Yes

Is it possible that most Muslims do not know the pagan sources of the symbols and rites of their own religion? Yes.

Are they shocked to find out the true sources of their ceremonies and stories? Yes

Can Islam be the religion of Abraham if it is derived from paganism? No

What then is Islam? A modern version of one of the ancient fertility cults.

Is the “Allah” of the Qur’an, the Christian God of Father, Son, and Holy Spirit? No

Do the Jews say that the Muslim “Allah” is their God too? No

Then who’s god is Allah? Paganism.