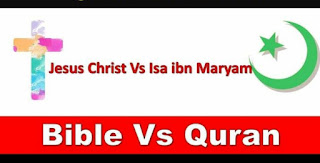 In this thread I will explain the difference between Jesus of the Bible and Isa of the Koran. Please be informed that, according to the God of the Bible, Names are very important in Biblical terms, in contrast, Allah of the Koran never cares much about the names. God used to name people according to their job, title, and calling. In the Old Testament we often see that the Angel of the Lord would tell the parents of the prophet what to name their child, and we see also that God would often change the prophet’s name after a turning point in the prophet’s life. For example, we see it in the life of Abraham, whose name was changed from Abram (Genesis 17:5), as well as many others through the entire Bible. And it was not just during the Old Testament time; we see it in the New Testament, as well, when Jesus changes the name of Simon into Peter (John 1:42).

Christ Jesus, the Son of the Living God, was not given His name because it was the name of His grandfather, not even because His earthly mother "Mary" gave Him that name, but because the Angel of the Lord gave Him the name anointed name - Jesus. As fully and impeccably explained in the gospel of according to Matthew 1:21, “You shall call His name Jesus, for it is He who will save His people from their sins.” Jesus is a Hebrew word meaning “Savior.”

Peter who was known Simon, the apostle said in his preaching to the Jews, “Salvation is in one else; for there is no other name under heaven given among men, by which we must be saved” (Acts 4:12). By that great name Jesus, which is above all names, those who believed in His name went around preaching the gospel of Jesus Christ. They commanded sickness and demons to leave the bound and the oppressed in the name of Jesus Christ the Son of the living God, and not in the name of Isa the son of Mary.

Accordingly, Prophet Isa of the Koran is not the same person as our Lord Jesus Christ whom we read about in the Gospel. Actually, Mohammed mentioned Isa as a prophet who was given a book to the people of Israel as it says, “And Allah will teach him (Isa) the Book and Wisdom, the Torah and the Gospel, and (appoint him) as a messenger to the Children of Israel” (Sure 3:48).

Muhammed came with a message to His people, saying, “Worship Allah, my Lord and your Lord; and I was a witness over them whilst I dwelt amongst them; when Thou didst take me up Thou wast the Watcher over them, and Thou art a witness to all things” (Sure 5:117), inter-alia, Jesus came with the Revelation, that is why Christians have Holy Spirit who is the Reveler of the Revelation of Jesus Christ.

After finishing His work on earth, Christ Jesus the Son of the Living God said to His disciples, “Go and teach the nations to observe all that I commanded you; and lo, I am with you always even to the end of the age” (Matthew 28:20). This could not be a normal prophet or messenger.

Please be informed that, Allah's Prophet Mohammed has changed the biblical picture of Messiah-Jesus—the Lord of Lords and the King of Kings to which every knee shall bow—into the picture of a normal prophet. Surely this made it easy for Mohammed to convince his people that he was a prophet to the Arabs, just like Moses and Isa son of Mary were prophets to their people, the Jews.

Wherefore, if the slave of Allah- Mohammed is to be believed, then we would also have to believe the messages of Buddha, the Hindus, and many other false prophets who were sent to deceive the world in order that it would not see the only true Light which came to our world—the one who enlightens every man (John 1:9), who came to set us free of our sins and healed those who were oppressed of the devil (Acts 10:38).

Jesus Christ the Son of the living God did not come to our world to give us a new religion or a new book, but came to destroy the work of the devil (1 John 3:8), that everyone who calls upon that name of Jesus the Savior shall be saved of his sins that separate him from the holy God (Isaiah 59:2).

Jesus tasted death for everyone (Hebrew 2:9).

You can read about the prophet Isa son of Mary in the Koran, but we believe in the Lord Jesus Christ the Son of the living God whom was written about in the Bible. That’s why you have to make a choice: Bible or Koran, Jesus the Son of God or Isa the son of Mary.

Jesus of the Bible is not Isa of the Koran.