DO YOU KNOW WHY MOHAMMAD DIVORCED HAFSA 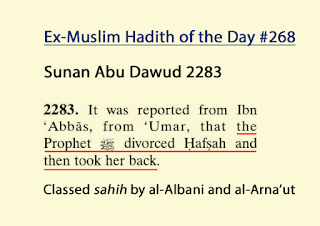 “Muhammad: the Best of All Husbands” divorces Hafsa (after Hafsa reveals his “secret” that she caught him having sex with his slave in Hafsa’s bed)

In this revealing hadith, Muhammad divorces his wife Hafsa.

In Islam, for a man to divorce a woman, all he must say is, “I divorce you.” He must say it three times, ideally over three menstrual cycles, for it to be finalized.

Muhammad gave Hafsa one divorce, but he took her back:

The Prophet ﷺ divorced Hafsah bint Umar. Her maternal uncles, Qudamah and Uthman, the sons of Maz‘un, visited her. She cried and said, “By Allah, he did not divorce me on account of satiation.” The Prophet ﷺ came and said, “Gabriel, peace be upon him, said to me, ‘Go back to Hafsah, for she fasts often and prays often at night, and she shall be your wife in Paradise.’”

It is consensus among the ulama that Muhammad divorced Hafsa because she revealed Muhammad’s "secret." This is what is discussed in Quran 66:1-5, some of the most extraordinarily self-serving verses in the entire Quran. (Allah warns Hafsa and Aisha that He's Muhammad protector and they had better stop ganging up on Muhammad. Then He threatens all of Muhammad's wives that Muhammad will divorce them if they don't shape up.)

The exegete al-Tabari also arrives at that conclusion in an interesting (to me) linguistic discussion on the term arrafa found in 66:3:

He arafa (without the shadda on the letter "r") what Ḥafṣa did when she revealed the secret that he confided in her, meaning: The Prophet ﷺ was angry with her and for that he punished her. Like the saying of one to someone who wronged him: “For I will penalize you (u’arrifanna) for what you did, meaning that I will punish you for it.

They said: And the Prophet ﷺ punished her for what she did by divorcing her.

So what was Muhammad’s secret? There are two different sahih stories on what happened. The first one makes sense. The second one makes no sense.

Scholars typically say that both stories are true, which I find implausible. In any case, the two stories are:

Muhammad is caught by wife Hafsa having sex with his slave Maria in Hafsa’s bed on Hafsa’s day. Muhammad tells Hafsa not to tell anyone and makes an oath to her that he won’t have sex with Maria anymore. Hafsa ends up telling Aisha the secret. All hell breaks loose when all the wives find out. (Nasai 3411, Tafsir al-Jalalayn 66:1)

Wives Aisha and Hafsa want Muhammad to stop eating honey with his wife Zainab bint Jahsh. They falsely tell Muhammad that he smells bad after eating honey at Zainab’s. Muhammad then makes an oath that he won’t eat honey with Zainab anymore, and this needs to be kept a secret. Hafsa tells some other wife this. All hell breaks loose when all the wives find out. (Bukhari 6691)

Muhammad behaves like a petulant man-child in divorcing Hafsa. After getting caught having sex with his slave on Hafsa’s bed, he should be begging Hafsa for forgiveness every single day. Instead, he divorces her.

But thankfully the angel Gabriel (or Hafsa’s father Umar) got Muhammad to take Hafsa back.

Funny enough, there is a book called The Prophet Muhammad: the Best of All Husbands. That Muhammad divorced Hafsa or had sex with his slave in Hafsa's bed is mentioned nowhere in the book.

For 2018, I am counting down the 365 worst hadiths, ranked from least worst to absolute worst. This is our journey so far: HOTD list.