Arabic Contradictions in the Qur’ān (3:146) Hafs Vs Warsh 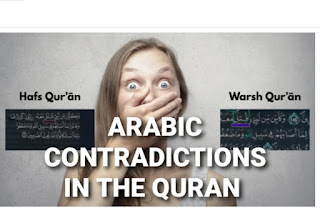 Continuing on with our series variant readings from different Arabic Qur’ān’s we’re going to look at the differences between the Hafs version compared with the Warsh recitation. Below is the English translation of the ayat.

How many of the prophets fought (قَاتَلَ) (in Allah’s way), and with them (fought) Large bands of godly men? but they never lost heart if they met with disaster in Allah’s way, nor did they weaken (in will) nor give in. And Allah Loves those who are firm and steadfast.

Here is the Arabic of Hafs focus on the bold word:

Let’s compare what we’ve read thus far in the Hafs Qur’ān and compare it with the Warsh version of the Qur’ān.

Here is the Arabic of Warsh notice the bolded Arabic letter has different markings than the one above.

Note the Warsh version has the word (قٌَتِلَ) which changes the meaning of the ayat. This word found in Warsh has different diacritical marks than the one in Hafs. The variant in the Warsh reads:

And how many a prophet were killed (قٌَتِلَ) and with him fought many religious scholars. But they never lost assurance due to what afflicted them in the cause of Allah , nor did they weaken or submit. And Allah loves the steadfast.

If one version says the prophets fought and the other says they were killed the significance of that statement between the two are vastly different. If someone fought in a war that doesn’t necessary mean they were killed. But if the statement is made that someone was killed then we realise that person is no longer alive.

Muslims claim there’s only 1 Qur’ān, translators will try to conceal certain words from the Arabic when translating into English. This is the deception of Islam, without lies Islam dies. These lies which Muslims using Dawah deceive many people into thinking there’s only 1 Qur’ān when in reality there are 37-40 different Arabic Qur’ān’s with different words.

Yes there are because in this article we’re speaking of different Arabic versions, not English translations. Unlike the Qur’ān the Bible is originally written in Hebrew and Greek, therefore, for Muslims to point at English translations and claim there’s many Bible versions is untrue. There’s only 1 Bible in Hebrew and Greek, in speaking of the Qur’ān there’s the Hafs, Warsh, Doori, Al-Susi, Qaloon, Abi Jafar, al-Bazzi and many more.

We would like to take the time to invite Muslims to come to the better and bigger book the Bible and learn about the Saviour of the world, the Lord Jesus Christ that they might have salvation.