Why Uthman burned the QURAN?

Why did Uthman burn all other versions of Quran and how did he choose the perfect version?

Narrated Anas bin Malik: Hudhaifa bin Al-Yaman came to `Uthman at the time when the people of Sham and the people of Iraq were Waging war to conquer Arminya and Adharbijan. Hudhaifa was afraid of their (the people of Sham and Iraq) differences in the recitation of the Qur’an, so he said to `Uthman, “O chief of the Believers! Save this nation before they differ about the Book (Qur’an) as Jews and the Christians did before.” So `Uthman sent a message to Hafsa saying, “Send us the manuscripts of the Qur’an so that we may compile the Qur’anic materials in perfect copies and return the manuscripts to you.” Hafsa sent it to `Uthman. `Uthman then ordered Zaid bin Thabit, `Abdullah bin AzZubair, Sa`id bin Al-As and `AbdurRahman bin Harith bin Hisham to rewrite the manuscripts in perfect copies. `Uthman said to the three Quraishi men, “In case you disagree with Zaid bin Thabit on any point in the Qur’an, then write it in the dialect of Quraish, the Qur’an was revealed in their tongue.” They did so, and when they had written many copies, `Uthman returned the original manuscripts to Hafsa. `Uthman sent to every Muslim province one copy of what they had copied, and ordered that all the other Qur’anic materials, whether written in fragmentary manuscripts or whole copies, be burnt. — Sahih al-Bukhari 4987

According to the authentic Hadiths (Sahih) from Bukhari there was a war and a Muslim named Hudhaifa bin Al-Yaman approached Uthman (the son-in-law to Muhammad). Because the Quran was memorised by men there was concerns that during the war individuals who knew the Quran by memory would be killed, thereby, they would lose portions of the Quran. Hudhaifa was afraid of the differences in the recitation of the Qur’an and said to Uthman “Save this nation before they differ about the Book (Qur’an) as Jews and the Christians did before”.

This is interesting, the Hadith is saying there were different recitations of the Quran which means different verses and words. Uthman then sought to standardize all of the different readings into 1 Quran.

Uthman then orders his men to rewrite the manuscripts in perfect copies, afterwards he returns Hafsa’s manuscripts and orders to burn any other Qur’anic materials, whether written in fragmentary manuscripts or whole copies. This proves that Uthman was trying to destroy other Arabic versions of the Quran which contradicts the Hafs version in order to make 1 Quran. 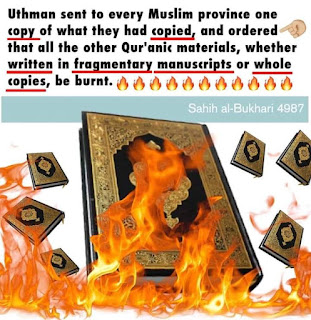