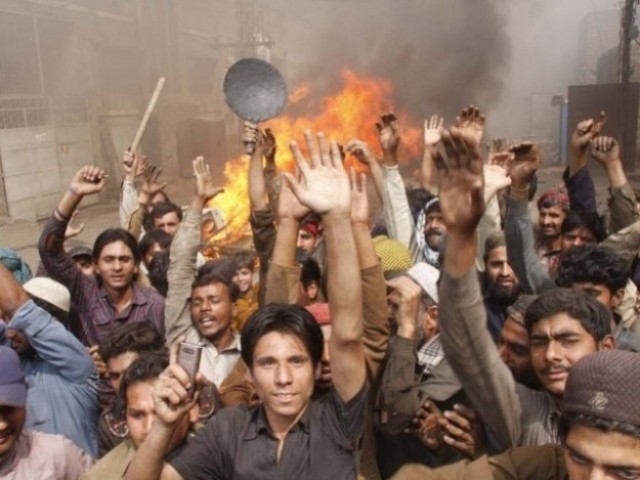 PHOTO: Express/File
FAISALABAD: A Christian teenager was brutally beaten up by a mob in Jhamkay town of Wazirabad tehsil , Gujranwala on Sunday over accusations of committing blasphemy.
AS*, 16, was rescued by police and then shifted to the Ali Pur Chattha police station where he was booked under Section 295-B of the Pakistan Penal Code – punishable with life imprisonment – on the complaint of a pesh imam, Qari Rana Arshad Ali.
Ali Pur Chattha SHO Malik Irfan said the cleric had told the police that AS took away a copy of the Holy Quran from the shrine of Sundhay Shah in Jhamkay and set it on fire.
ADVERTISEMENT
Ad
13-year-old boy killed as alleged blasphemy triggers violent protest in Balochistan
The complainant further claimed that AS, in the presence of a witness named Muhammad Nawaz, had confessed to his crime.
Sub-Inspector Pervez Iqbal, the investigation officer of the case, said two witnesses and the complainant had testified that the teenager had committed blasphemy.
He added that AS too had admitted that he had set the Holy Quran on fire, however he was unaware as to why he had committed the act.
The officer said as the suspect himself had confessed to his crime, there was no need for recording the statements of other witnesses.
“The police saved him from the enraged mob,” the sub-inspector said.
“His family should should be grateful to the police. The mob surrounded the police station but we pacified the protesters with the help of the notables of the area,” he added.
However, SM*, the father of the teenager, maintained that his son was falsely accused of committing blasphemy.
Mob attacks man in Chitral for ‘blasphemy’
“He [AS] collects papers and used bottles from garbage and sells them to support our family. He also collects empty bottles from the shrine, which is around two kilometres away from our home,” he said.
“Muhammad Nawaz alias Maju, the witness in the case, also collects papers and bottles from the shrine. He has a grudge against my son as he doesn’t want him to collect scrap at the shrine because it hurts his business,” he added.
SM said his son was framed under a conspiracy that started about four weeks ago.
“On July 18 or 19, Nawaz claimed that somebody had burnt a copy of the Holy Quran at the shrine and made an issue out of it.”
The father claimed that on August 12, AS went to a market to buy cigarettes when Nawaz caught him and started beating him up. He also gathered a crowd shouting that AS had stolen money from the tomb’s donation box. He then called up the cleric and told him that he had caught the person who had burnt the Holy Quran.
Three women confess to killing alleged blasphemer in Sialkot
“Qari Rana Arshid, who’s the pesh imam at a mosque, arrived there and without confirming anything, he too started beating up my son,” SM added.
“Someone from our community called up the police helpline 15. The police arrived there and took my son to the police station.”
The pesh imam, along with the mob, reached the Jhamkay police post where they barged inside the lock-up and started thrashing AS. The area’s police called up Ali Purr Chatta police station and asked them for help.
The Ali Purr Chatta police arrived there and took AS into custody.
The pesh imam, Qari Arshid Ali, told The Express Tribune that he was a landlord and also elected the councillor of the area.
“I haven’t seen him [AS] burning the Holy Quran, but I was told about this incident by Muhammad Nawaz,” he added.
“When the mob was beating up AS, I helped the police save him,” he maintained.
*Names withheld to protect privacy
at August 20, 2017