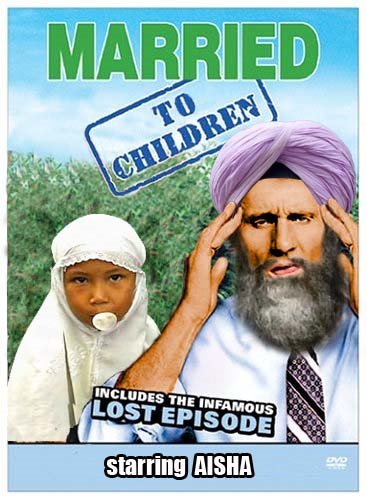 Narrated Aisha:
I used to look down upon those ladies who had given themselves to Allah's Apostle and I used to say, "Can a lady give herself (to a man)?" But when Allah revealed: "You (O Muhammad) can postpone (the turn of) whom you will of them (your wives), and you may receive any of them whom you will; and there is no blame on you if you invite one whose turn you have set aside (temporarily).' (33.51) I said (to the Prophet), "I feel that your Lord hastens in fulfilling your wishes and desires."

It is apparent that the mother of all muslims, Aisha, was jealous of Mohammad's phialndering ways. Why else would she look down on women freely giving themselves up to her husband? Afterall, this would only mean more competition for her, a woman in er mid-teenage years, sharing a 60 year old man with scores of other women. http://muslimhadith.blogspot.com/2008/06/aisha-jealous-of-mohammed-womanizer.html

Once again, Allah, in his timeless masterpiece, the quran, gave another situational scripture to specifically allow Mohammad to do whatever he wants with his wives and concubines, whenever he wants.

1) Did Sahih Bukhari include this explanation of the quran to show that Mohammad, the philanderer, could do whatever he wanted because he in fact, was Allah, in the religion of Islam?
2) If Mohammad is the perfect example for all Muslims, does this mean that men in today's world could twist the Quran however they want in order for them to fulfill their own sexual and carnal desires? (Please see this example - http://news.bbc.co.uk/2/hi/africa/7547148.stm)
3) If Allah is the all-knowing creator of the universe, trying to create the perfect book, and taking care of the universe, why would Allah specifically hand down a quran surrah saying that Mohammad has no blame for sleeping around with any of his wives, regardless of whose turn it was, and thus, not treating his wives equally?
a) Could the reason be that Mohammad was Allah, that Mohammad knew that his actions were hypocritical, and thus came up with a convenient surah to cover up his own actions?
b) Did Bukhari include this verse to illustrate how quran surahs were ordained - as convenient outclauses for Mohammad to get out of quandries created by his own hypocritical standards?

Finally, Aisha, the mother of all Muslims, said "I feel that your Lord hastens in fulfilling your wishes and desires."

1) Why did she say "Your Lord" instead of "Our Lord"?
a) Was it because she implicitly did not want to have anything to do with a deity that allows her husband to have sexual relations with whom ever, and whenever he wants, but not allow her the same rights of philandering as him?
2) Was it because she herself believed that Allah was actually Mohammad, coming up with convenient surahs to allow him to do whatever he wanted?
3) Did Bukhari include this hadith to show that the mother of all muslims was not convinced of Mohammad's prophethood?
a) That Muslims during Mohammad's day believed his actions to be completely self-serving, and that a timeless quran would not be so focused on the justifications of the bedroom antics of its lone prophet?
at March 09, 2018