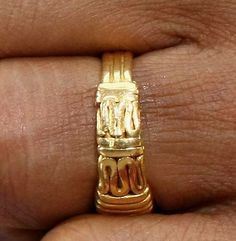 Chapter 3: IT IS NOT PERMISSIBLE FOR A MAN TO WEAR CLOTHES OF YELLOW COLOUR
Book 024, Number 5178:
'Ali b. Abu Talib reported: Allah's Meisenger (may peace be upon him) forbade me to use gold rings. to wear silk clothes and to recite the Qur'an in ruku' and sajda (prostration), and to wear yellow garments.

1) Why did Allah's apostle forbid gold rings?
a) What religious reason existed for this?
b) Was it because Mohammad could not afforda gold ring at the time he bought a silver ring which was engraved "Muhammad, Messenger of Allah"

c) As such, would he be jealous of a person having a more valuable ring than his ring of prophethood?
d) Or was it because gold is yellow, showing just how ridiculous Mohammad's fashion criteria is?

2) Why did Mohammad forbid silk clothes
a) Was it because it was smooth against the skin?
b) Or was that his "followers" who were bad tempered like Makhrama bully Mohammad into giving silk?

Volume 4, Book 53, Number 356:
Narrated 'Abdullah bin Abu Mulaika:
Some silken cloaks with golden buttons were presented to the Prophet. He distributed them amongst his companions and kept one for Makhrama, bin Naufal. Later on Makhrama came along with his son Al-Miswar bin Makhrama, and stood up at the gate and said (to his son). "Call him (i.e. the Prophet) to me." The Prophet heard his voice, took a silken cloak and brought it to him, placing those golden buttons in front of him saying, "O Abu-al-Miswar! I have kept this aside for you! O Abu-al Miswar! I have kept this aside for you!" Makhrama was a bad-tempered man.

3) Why did Mohammad forbid yellow clothes?
a) Was it because it reminded him of the yellow sands of Arabia?
b) Wouldnt forbidding black in the heat of the dessert been more appropriate, as opposed to yellow?
c) Did Sahih Muslim include this to show how ridiculous Mohammad's rules are?
and yellow garments?
at March 09, 2018