Why some Muslim Syrian refugees are converting to Christianity 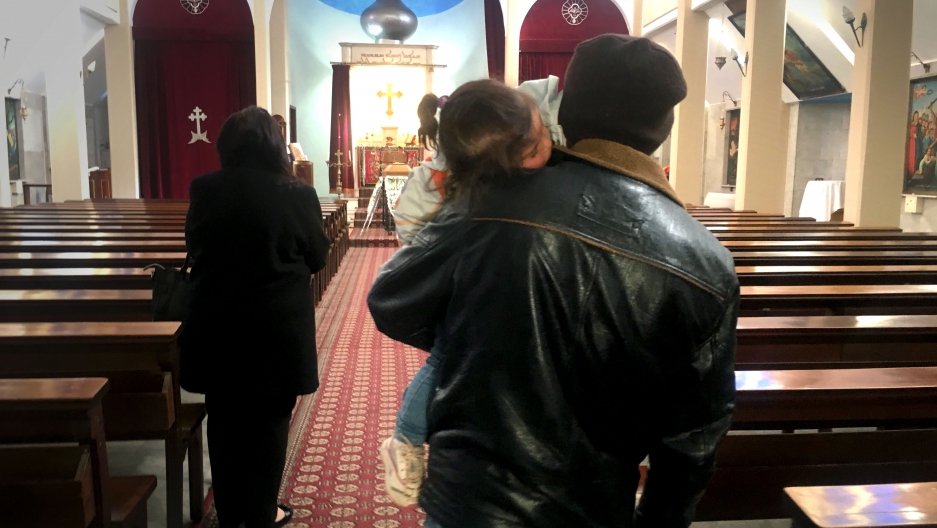 Abu Radwan enters a church on the outskirts of Beirut with his wife and two kids. His wife removes the black headscarf covering her hair. It was here, a year and a half ago, that they converted to Christianity.
“Of course it was a difficult decision,” Abu Radwan says. “I was born into a Muslim family.”
The family is from the city of Homs in Syria. They sought refuge in Lebanon at the beginning of the war. Then two years ago, Abu Radwan says Jesus appeared to him in a dream.
“I started going to the church,” he says. “I believed that Jesus was coming to help us, to save us.”
Seven months later, he decided to become a Christian.
“We accepted him as a member of the church and baptized him, together with his wife and children," says Bishop George Saliba. “And we take care of him.”
Saliba says he has baptized around 100 Muslim Syrian refugees since the start of the war in Syria in 2011.
“Because [of] the constitution of Lebanon, they have the right to change their religion [here],” Saliba says. “But in Syria, Iraq, Egypt, it is impossible.”
It’s illegal, or at least dangerous, for Muslims to convert in those Muslim-majority countries.
It’s hard to know how many Syrian refugees have converted to Christianity in Lebanon in the past few years, because Bishop Saliba isn’t the only one doing conversions here.
At another church in Beirut, Syrian refugees gather in a circle around a pastor. They read Bible passages while sitting on plastic chairs under bright fluorescent lights. Some of the women still wear hijabs as they discuss the text.
“The Lord said go and teach them. I’m leading them in the Bible,” the pastor says. “I’m teaching them Christian doctrines.”
The pastor doesn’t want to be identified, and the church asked us not to mention its name. They fear reprisal from radical Islamist groups like ISIS.
Related: How an Iraqi Christian teenager survived two years in the heart of the ISIS 'caliphate'
The pastor says his church doesn’t push anyone to convert or offer anything in exchange for becoming Christian, though, like many churches, they do provide food and assistance to those in need.
The pastor won’t say how many refugees his evangelical church has converted, but he says there are dozens of Bible study groups for refugees in Lebanon.
“The ones that accept the Lord, we put them in groups,” he says. “We teach them about the Bible and the Lord so they will grow in faith.”
But others raise questions about that faith. Even some Christian leaders and other Syrian Christian refugees say they think the converts are just looking for assistance and help to immigrate to Western countries. Bishop Saliba denies this and insists that he questions potential converts to ensure their faith is genuine.
“When I see a person wishes to be Christian, I don’t stop him,” he says, “but we try to test him.”
Abu Radwan, the convert, says he does get assistance from the church — about $200 a month. And he believes that being Christian will help his family get resettled in a Western country.
“Of course it will be easier,” he tells me.
Related: Americans in Lebanon say they're on a mission from God to teach Syrian refugee kids
The United Nations does resettlement based on vulnerability criteria — essentially, how much an individual or family is at risk. In the past, the US has used the same criteria. It hasn’t given preference to Christians, though President Donald Trump has said it’s a priority for his administration. Few Western countries do put Christians at the head of the line, though some have church sponsorship programs for refugees.
In 2016 nearly all the Syrian refugees accepted by the US were Muslim; fewer than 1 percent were Christian. (Around 10 percent of the Syrian population is Christian.) Yet, many refugees like Abu Radwan believe that being Christian will give them a leg up.
“I want to get out of Lebanon,” he says. “I want to emigrate. I’ve tried all ways.”
In the meantime, the conversion has put Abu Radwan and his family at greater risk here in Lebanon.
He pulls up his shirt to reveal a bandage on his torso. Last week, he says, he was stabbed on the street.
“I was coming from church,” he says.
Abu Radwan says the attackers were Syrians from his tribe; they don’t accept his conversion. It’s why his wife still wears a hijab outside of church. It has also made going home to Syria almost impossible. His tribe, he says, has issued an order to kill him. But he doesn’t regret his conversion.
“I was relieved when I was baptized,” he says. “If I die, now, here in front of the church, I will die in peace.”
Source www.pri.org
at March 27, 2018