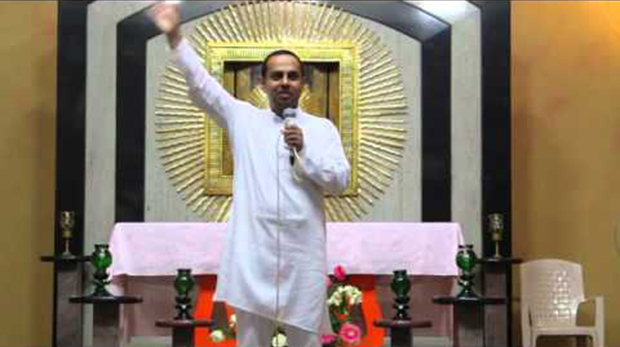 In the 14-minute video shown below, Mario Joseph, a former Muslim Imam shares how he became a believer in Jesus Christ by reading the Koran.
Mario was born into a Muslim family and raised as a devoted Muslim, eventually becoming an Imam. One day while he was teaching in the mosque, one of his students asked, “Who is Jesus?”
Mario did not have a good answer, so he read the entire Koran once again, all 6,666 verses, to find what it says about Jesus. He found in chapter 3:45-55 the Koran identifies Jesus as the Word of God, the Spirit of God, the Messiah, the Christ, born to a virgin named Mary, conceived in her womb by the decree, the spoken word of God. In addition, it says Jesus created a bird from the dust, healed the blind and the leprous, raised the dead, was put to death by the will of God, was then resurrected from the dead, ascended into heaven, and will one day return. Verse 3:55 says God (Allah) will cause those who follow Jesus to be above those who do not believe in Him.
Based on the Koran, Mario compared Jesus with Muhammad and realized these facts:
So, Mario concluded Jesus Christ is greater than Muhammad and became a follower of Jesus. The complete passage from the Koran is shown here.
[3.45] When the angels said: O Marium (Mary), surely Allah gives you good news with a Word from Him (of one) whose name is the ‘Messiah (Christ), Isa (Jesus) son of Marium (Mary), worthy of regard in this world and the hereafter and of those who are made near (to Allah).
[3.46] And he shall speak to the people when in the cradle and when of old age, and (he shall be) one of the good ones.
[3.47] She said: My Lord! When shall there be a son (born) to me, and man has not touched me? He said: Even so, Allah creates what He pleases; when He has decreed a matter, He only says to it, Be, and it is.
[3.48] And He will teach him the Book and the wisdom and the Tavrat and the Injeel (the Bible).
[3.49] And (make him) an apostle to the children of Israel: That I have come to you with a sign from your Lord, that I determine for you out of dust like the form of a bird, then I breathe into it and it becomes a bird with Allah’s permission and I heal the blind and the leprous, and bring the dead to life with Allah’s permission and I inform you of what you should eat and what you should store in your houses; most surely there is a sign in this for you, if you are believers.
[3.50] And a verifier of that which is before me of the Torah and that I may allow you part of that which has been forbidden to you, and I have come to you with a sign from your Lord. Therefore be careful of (your duty to) Allah and obey me.
[3.51] Surely Allah is my Lord and your Lord, therefore serve Him; this is the right path.
[3.52] But when Isa (Jesus) perceived unbelief on their part, he said, “Who will be my helpers in Allah’s way?” The disciples said: We are helpers (in the way) of Allah: We believe in Allah and bear witness that we are submitting ones (Muslims).
[3.53] Our Lord! we believe in what Thou hast revealed and we follow the apostle, so write us down with those who bear witness.
[3.54] And they planned and Allah (also) planned, and Allah is the best of planners.
[3.55] And when Allah said: O Isa (Jesus), I am going to terminate the period of your stay (on earth) and cause you to ascend unto Me and purify you of those who disbelieve and make those who follow you above those who disbelieve to the day of resurrection; then to Me shall be your return, so I will decide between you concerning that in which you differed. (Koran 3:45-55)
After he became a Christian, Mario was severely persecuted by his own family. His father tried to murder him, but Jesus delivered him. He shares his amazing story in this video.

James Bailey is an author, business owner, husband and father of two children. His vision is to broadcast the good news of Jesus Christ through blog sites and other media outlets.
© 2017, Z3 News. Full text of Z3 News articles may be shared online in exchange for a clickable link to our site. Please include the author name and do not make any changes to text or titles. No image files from our site may be shared because we don’t own them. For permission to use our content in other formats, please contact us.
at March 27, 2018