Narrated Sad:
Allah's Apostle said, "He who eats seven 'Ajwa dates every morning, will not be affected by poison or magic on the day he eats them."

1) Did Mohammad eat these seven 'Ajwa dates when Magic was worked on Allah's Apostle so that he began to imagine that he had done something although he had not? http://muslimhadith.blogspot.com/2008/05/volume-7-book-71-number-661-narrated.html

a) Did these magic spells only apply to sexual relations with his wife?
Bukhari: Volume 8, Book 73, Number 89:
Narrated 'Aisha:
The Prophet continued for such-and-such period imagining that he has slept (had sexual relations) with his wives, and in fact he did not. One day he said, to me, "O 'Aisha! Allah has instructed me regarding a matter about which I had asked Him. There came to me two men, one of them sat near my feet and the other near my head. The one near my feet, asked the one near my head (pointing at me), 'What is wrong with this man? The latter replied, 'He is under the effect of magic.' ……

b) Or was it because Mohammad himself was Mohammad using magic spells as an excuse to about how he infact was impotent? "One day he said, to me, "O 'Aisha! Allah has instructed me regarding a matter about which I had asked Him." Bukhari: Volume 8, Book 73, Number 89
c) Why didnt the profit have any other children after Khadija, except for Ibrahim from his slave girl, Mary the Copt?

2) Do all Muslims eat seven 'Ajwa dates every morning?
3) Why didn't Mohammad eat 7 Ajwa dates as a cure for the magic curses Labad put on him?
4) How did Mohammad know about magic spells?
a) Did Mohammad dabble in the black arts?

Tabari VI:66
"A man came to the Prophet and said, 'Show me the seal which is between your shoulders, and if you lie under any enchantment [a demonic curse or spell] I will cure you, for I am the best enchanter [a witch practicing black magic] of the Arabs.' 'Do you wish me to show you a sign.' asked the Prophet. 'Yes. Summon that cluster.' So the Prophet looked at a cluster of dates hanging from a palm and summoned it, and began to snap his fingers until it stood before him. Then the man said, 'Tell it to go back.' and it went back. The enchanter said, 'I have never seen a greater magician than I have seen today.'"
b) Does this mean that the enchanter was right to call Mohammad a magician, and the Meccans were also right when they called him a demon possessed sorcerer? (038.004 YUSUFALI: So they wonder that a Warner has come to them from among themselves! and the Unbelievers say, "This is a sorcerer telling lies! "
c) Maybe Mohammad was right about Ajwa dates - he himself is a good magician! 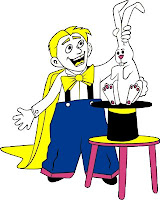 6) Could Mohammad also pull a rabbit out of his turban?
a) Was Mohammad the first person to entertain children at birthday parties with magic tricks?
b) Does this mean that clowns at magic shows are halal?
c) Does this mean that being a sorceror is a noble profession (like the noble Quran)?
d) Does this mean that Muslims should also start celebrating Halloween as a religious holiday in commemoration of Mohammad's excellent wizardry?
at March 09, 2018