Saudi Muslim is now a Strong Christian. Emad Al Abdy says it is his mission to take the gospel of Jesus Christ to Muslims in Saudi Arabia 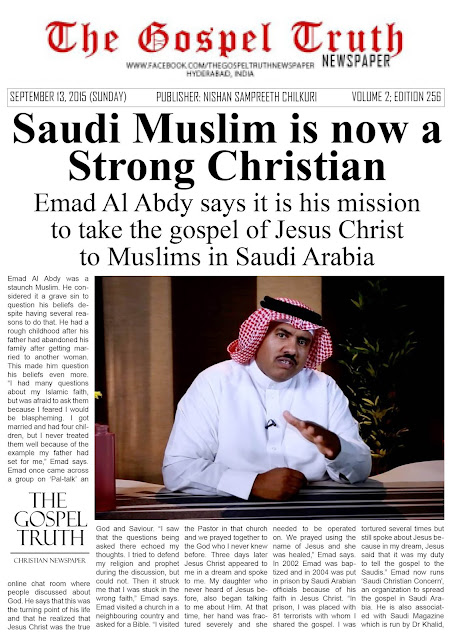 Saudi Muslim is now a Strong Christian.
Emad Al Abdy says it is his mission to take the gospel of Jesus Christ to Muslims in Saudi Arabia.

Emad Al Abdy was a staunch Muslim. He considered it a grave sin to question his beliefs despite having several reasons to do that. He had a rough childhood after his father had abandoned his family after getting married to another woman. This made him question his beliefs even more.  “I had many questions about my Islamic faith, but was afraid

Task them because I feared I would be blaspheming. I got married and had four children, but I never treated them well because of the example my father had set for me,” Emad says. Emad once came across a group on ‘Pal-talk’ an online chat room where people discussed about God. He says that this was the turning point of his life and that he realized that Jesus Christ was the true God and Saviour. “I saw that the questions being asked there echoed my thoughts. I tried to defend my religion and prophet during the discussion, but could not.

Then it struck me that I was stuck in the wrong faith,” Emad says. Emad visited a church in a neighbouring country and asked for a Bible. “I visited the Pastor in that church and we prayed together to the God who I never knew before. Three days later Jesus Christ appeared to me in a dream and spoke to me. My daughter who never heard of Jesus before, also began talking to me about Him. At that time, her hand was fractured severely and she needed to be operated on. We prayed using the name of Jesus and she was healed,” Emad says. In 2002 Emad was baptized and in 2004 was put in prison by Saudi Arabian officials because of his faith in Jesus Christ. “In prison, I was placed with 81 terrorists with whom I shared the gospel. I was tortured several times but still spoke about Jesus because in my dream, Jesus said that it was my duty to tell the gospel to the Saudis.” Emad now runs ‘Saudi Christian Concern’, an organization to spread the gospel in Saudi Arabia. He is also associated with Saudi Magazine which is run by Dr Khalid, another Saudi Christian.
at March 04, 2018