A Saudi Muslim discovers Jesus. Dr Khalid A Shamry, a microbiologist, is now reaching out to Muslims with the gospel. 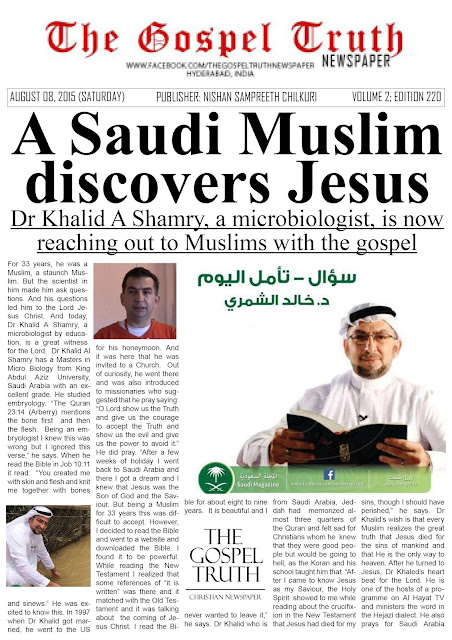 A Saudi Muslim discovers Jesus.
Dr Khalid A Shamry, a microbiologist, is now reaching out to Muslims with the gospel.

For 33 years, he was a Muslim, a staunch Muslim. But the scientist in him made him ask questions. And his questions led him to the Lord Jesus Christ. And today, Dr Khalid A Shamry, a microbiologist by education, is a great witness for the Lord.

Dr Khalid Al Shamry has a Masters in Micro Biology from King Abdul Aziz University, Saudi Arabia with an excellent grade. He studied embryology. “The Quran 23:14 (Arberry) mentions the bone first  and then the flesh.  Being an embryologist I knew this was wrong but I ignored this verse,” he says. When he read the Bible in Job 10:11 it read:  “You created me with skin and flesh and knit me together with bones and sinews.” He was excited to know this.

In 1997 when Dr Khalid got married, he went to the US for his honeymoon. And it was here that he was invited to a Church.  Out of curiosity, he went there and was also introduced to missionaries who suggested that he pray saying: "O Lord show us the Truth and give us the courage to accept the Truth and show us the evil and give us the power to avoid it." He did pray. “After a few weeks of holiday I went back to Saudi Arabia and there I got a dream and I knew that Jesus was the Son of God and the Saviour. But being a Muslim for 33 years this was difficult to accept.

However, I decided to read the Bible and went to a website and downloaded the Bible. I found it to be powerful. While reading the New Testament I realized that some references of "it is written" was there and it matched with the Old Testament and it was talking about  the coming of Jesus Christ. I read the Bible for about eight to nine years.

It is beautiful and I never wanted to leave it,” he says. Dr Khalid who is from Saudi Arabia, Jeddah had  memorized almost three quarters of the Quran and felt sad for Christians whom he  knew that they were good people but would be going to hell, as the Koran and his school taught him that. “After I came to know Jesus as my Saviour, the Holy Spirit  showed to me while reading about the crucifixion in the New Testament that Jesus had died for my sins, though I should have perished,” he says. Dr Khalid’s wish is that every Muslim realizes the great truth that Jesus died for the sins of mankind and that He is the only way to heaven.

After he turned to Jesus, Dr Khaled’s heart beat for the Lord. He is one of the hosts of a programme on Al Hayat TV  and ministers the word in the Hejazi dialect. He also prays for Saudi Arabia
at March 04, 2018