“I’m an Arab and a Christian” God is at work in the middle-east, says Nabil Costa of Lebanon 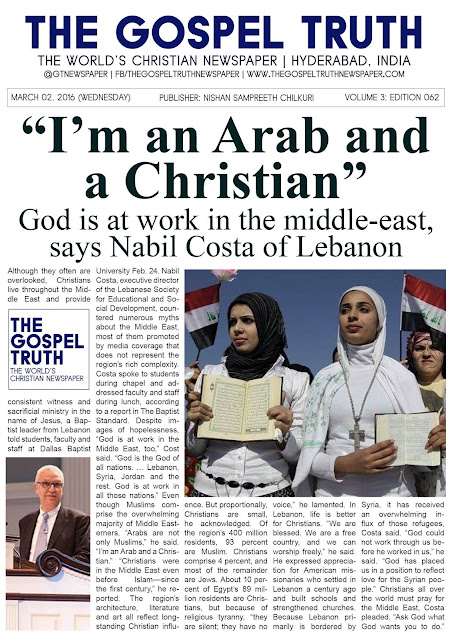 “I’m an Arab and a Christian”
God is at work in the middle-east, says Nabil Costa of Lebanon.

Although they often are overlooked, Christians live throughout the Middle East and provide consistent witness and sacrificial ministry in the name of Jesus, a Baptist leader from Lebanon told students, faculty and staff at Dallas Baptist University Feb. 24.

Nabil Costa, executive director of the Lebanese Society for Educational and Social Development, countered numerous myths about the Middle East, most of them promoted by media coverage that does not represent the region’s rich complexity. Costa spoke to students during chapel and addressed faculty and staff during lunch, according to a report in The Baptist Standard.

Despite images of hopelessness, “God is at work in the Middle East, too,” Cost said. “God is the God of all nations. … Lebanon, Syria, Jordan and the rest. God is at work in all those nations.” Even though Muslims comprise the overwhelming majority of Middle Easterners, “Arabs are not only Muslims,” he said. “I’m an Arab and a Christian.” “Christians were in the Middle East even before Islam—since the first century,” he reported.

The region’s architecture, literature and art all reflect longstanding Christian influence. But proportionally, Christians are small, he acknowledged. Of the region’s 400 million residents, 93 percent are Muslim. Christians comprise 4 percent, and most of the remainder are Jews. About 10 percent of Egypt’s 89 million residents are Christians, but because of religious tyranny, “they are silent; they have no voice,” he lamented.

In Lebanon, life is better for Christians. “We are blessed. We are a free country, and we can worship freely,” he said. He expressed appreciation for American missionaries who settled in Lebanon a century ago and built schools and strengthened churches.  Because Lebanon primarily is bordered by Syria, it has received an overwhelming influx of those refugees, Costa said. “God could not work through us before he worked in us,” he said. “God has placed us in a position to reflect love for the Syrian people.”

Christians all over the world must pray for the Middle East, Costa pleaded. “Ask God what God wants you to do.”
at March 04, 2018