An Imam from Kerala now preaches the gospel of Jesus. Shakir became an Imam in Hyderabad and a meeting with a Muslim-turned-Christian changed his life 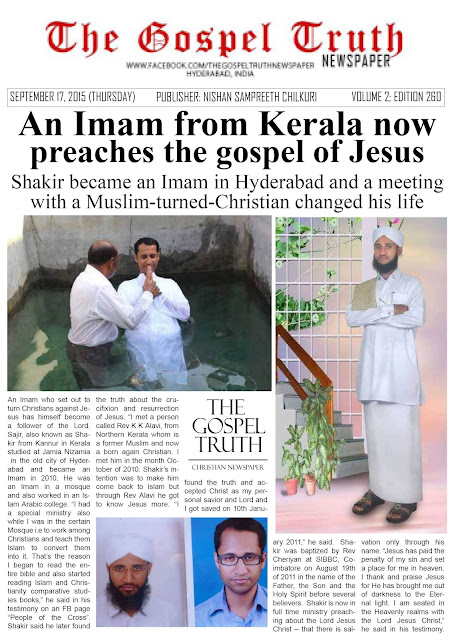 An Imam from Kerala now preaches the gospel of Jesus.

Shakir became an Imam in Hyderabad and a meeting with a Muslim-turned-Christian changed his life.
An Imam who set out to turn Christians against Jesus has himself become a follower of the Lord.

Sajir, also known as Shakir from Kannur in Kerala studied at Jamia Nizamia in the old city of Hyderabad and became an Imam in 2010.

He was an Imam in a mosque and also worked in an Islam Arabic college. “I had a special ministry also while I was in the certain Mosque i.e to work among Christians and teach them Islam to convert them into it. That's the reason I began to read the entire bible and also started reading Islam and Christianity comparative studies books,” he said in his testimony on an FB page “People of the Cross”.

Shakir said he later found the truth about the crucifixion and resurrection of Jesus. “I met a person called Rev K K Alavi, from Northern Kerala whom is a former Muslim and now a born again Christian. I met him in the month October of 2010.

Shakir’s intention was to make him come back to Islam but through Rev Alavi he got to know Jesus more. “I found the truth and accepted Christ as my personal savior and Lord and I got saved on 10th January 2011,” he said.  Shakir was baptized by Rev Cheriyan at SIBBC, Coimbatore on August 19th of 2011 in the name of the Father, the Son and the Holy Spirit before several believers.

Shakir is now in full time ministry preaching about the Lord Jesus Christ – that there is salvation only through his name. “Jesus has paid the penalty of my sin and set a place for me in heaven. I thank and praise Jesus for He has brought me out of darkness to the Eternal light. I am seated in the Heavenly realms with the Lord Jesus Christ,” he said in his testimony.