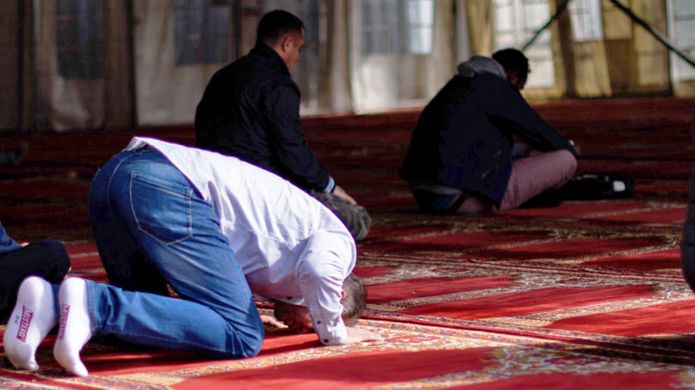 Austria has said it will close down seven mosques and expel imams who it says are funded by foreign countries.
Chancellor Sebastian Kurz said the move was a crackdown on political Islam.
Some mosques are suspected of having links to Turkish nationalists. In April images emerged showing children in Turkish army uniforms re-enacting the World War One Battle of Gallipoli.
The Turkish president's office called Austria's move "Islamophobic, racist and discriminatory".
The Austrian government says 60 of the 260 imams in the country are being investigated, of whom 40 belong to ATIB, an Islamic organisation in Austria close to the Turkish government.
"Parallel societies, political Islam and radicalisation tendencies have no place in our country," said Chancellor Kurz on Friday.

What prompted the crackdown?

The Gallipoli re-enactment performance took place in a Vienna mosque reported to be run by ATIB.
The WW1 battle, one of the last victories of the Ottoman Empire, stopped Allied forces reaching its capital, Constantinople.
Austrian media report (in German) that the child actors played dead and were covered with Turkish flags.
Separately, Austrian public broadcaster ORF says photos of children doing the Turkish nationalist Grey Wolves greeting came from a mosque in Vienna's Favoriten district run by the Grey Wolves, a group with branches in several countries.
The government is dissolving an organisation called the Arab Religious Community. Six of the mosques targeted for closure are run by it: three in Vienna, two in Upper Austria and one in Carinthia.
In neighbouring Germany, police have been probing links between certain imams and the Turkish state, which funds a Muslim organisation called Ditib.
The Austrian authorities have been working with a Muslim community body called IGGÖ to identify mosques and imams suspected of radical Islamist or nationalist connections.

How bad are Austria-Turkey relations?

They have soured significantly in recent years.
Mr Kurz's election campaign last year drew heavily on anxiety about immigration and the integration of Muslims. His conservative People's Party (ÖVP) formed a coalition government with the far-right Freedom Party (FPÖ).
Mr Kurz wants the EU to break off Turkey's EU membership negotiations - a stance that has angered Turkish President Recep Tayyip Erdogan.
In May 2017 that anger led Turkey to veto Nato's co-operation with Austria. The move disrupted Nato's partnership activities with 41 countries. Turkey is a key player in Nato operations.
President Erdogan's ruling AK Party has roots in political Islam and espouses traditional Muslim values.
He is campaigning for re-election, and both Austria and Germany are wary of his political influence in their Turkish communities.
The governments in Austria and other Central European countries - Hungary, Slovakia, the Czech Republic and Poland - want to restrict Muslim immigration to Europe.
There is friction between them and Germany, which took in about one million mainly Muslim asylum seekers in 2015.
Turkey is housing more than three million Syrian refugees and says the EU is not doing enough to help.
Source BBC
at June 08, 2018