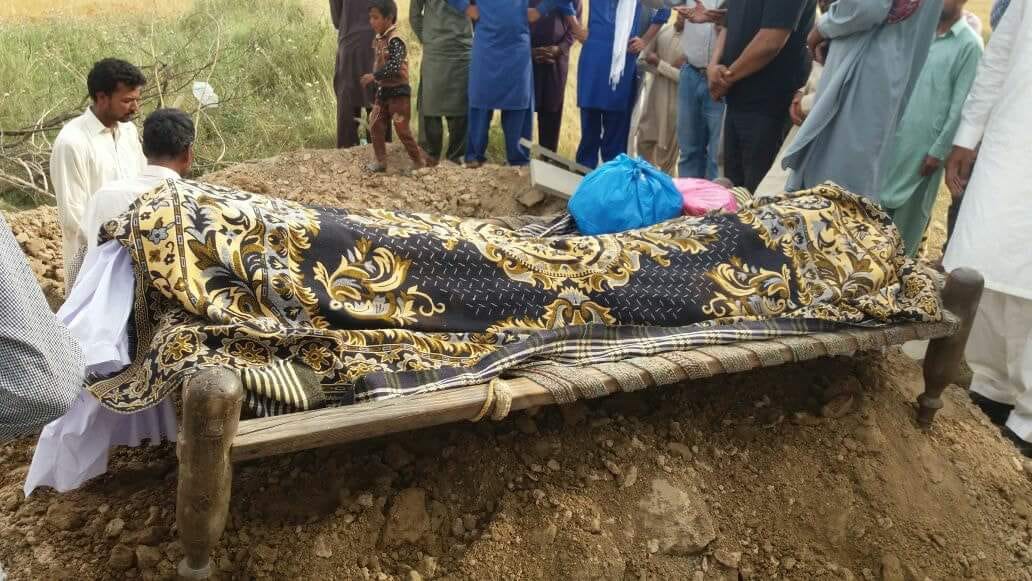 Pakistan (MNN) — On May 6, an impoverished 17-year-old Christian Pakistani girl, serving in domestic work, was killed by her Muslim employer. The reason for the monstrous murder—‘not cleaning properly’.

The victim, Kainat Masih, lived in Gujranwala in the Punjab province where she had worked since she was a kid, as a live-in maid for a Muslim family. On the day of her death, her father had come to her employer’s home to visit with her, a rare occurrence in these situations. 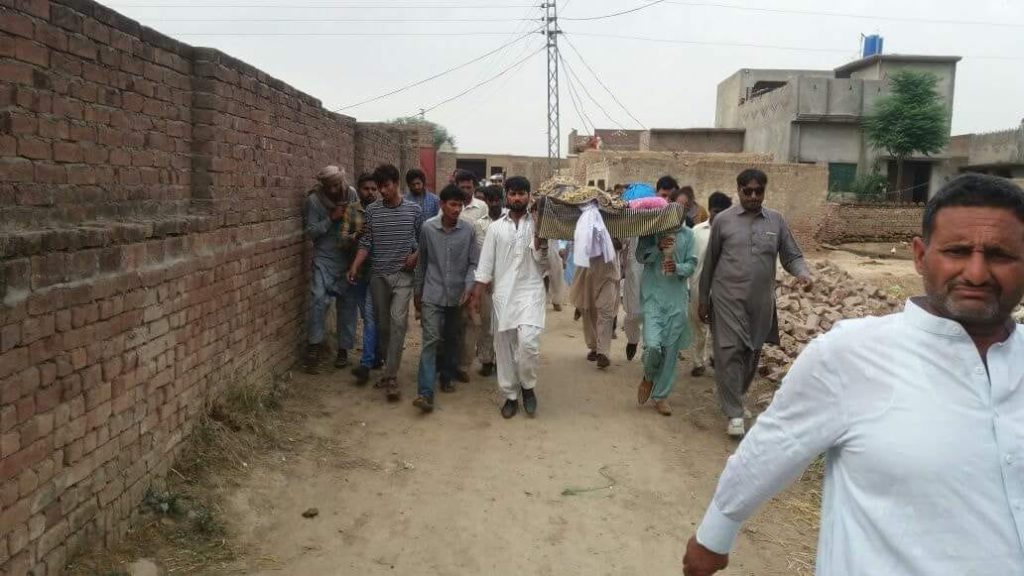 The funeral procession for Kainat Masih. (Photo courtesy of FMI)
Upon arrival, her father saw Masih’s arms and legs were being held down by her employer, his wife, two other men, and a woman. Masih was being strangled by a rope tied around her neck. Masih’s helpless father pleaded with these people to not kill his daughter, but to no avail.
The grotesqueness of the situation doesn’t end there. The 17-year-old had been raped by all three of these men. In fact, she had been raped for years by her employer.
Masih’s murder is currently under investigation. No arrests have been made, and none are expected to be since Masih’s employer, Asif Ismail, is the son of a local political party leader, Ismail Gujjar.
“The Christians in Pakistan, for the most part, are a very impoverished community. They’re a sliver of the demographics that make up Pakistan, as a minority. And so they often feel like there’s nothing for them in society,” FMI’s Bruce Allen explains.
“They’re discriminated against in terms of education and therefore in terms of employment. So sometimes having a job as domestic help, a housekeeper, a maid, that’s all that they can think is their lot in life.”

Christians are treated as third-class citizens in Pakistani society. In the Muslim majority, there are hardly second thoughts when it comes to beating, raping, and even killing the help for no reason other than disliking them. Since this type of work is almost thought of as a “destiny” for these individuals, many domestic workers accept the sexual exploitation that often comes with it. Stories like Masih’s, which feature the abuse and even death, are not uncommon in Pakistan.
The only requirement for someone entering domestic work is to be an underage girl. Combine this with the fact domestic workers are live-in servants available to the family 24/7, there’s a lot of room for abuse to happen.
“Some of the most recent data that I could find was from the end of 2016, early 2017…more than 12.5 million children in Pakistan are involved in child labor. And if we look at just the number of kids under the age of 10, it’s 6 million,” Allen recalls.
Most of the children who are represented in these statistics come from minority families. Their work, like Masih’s, involves housekeeping duties in Muslim homes and frequent abuse. Allen says what happened to Masih is “the tip of the iceberg as far as the plight for Christian youth in Pakistan.”
Because of the poverty minority families face, parents sell their children as domestic house workers. The act smells of human trafficking– because it is. Oftentimes there is a middleman who brokers the deal. Parents usually do not know who their child is sold to, or where their child will work. For many of these families, selling their kid means one less mouth to feed and they receive their child’s wages.

Still, how can a Christian family rationalize selling their child into domestic work? Well, just because someone wears a Christian label does not mean there’s a true faith in Christ. Plus, sometimes ‘Christian’ isn’t defined as a follower of Christ. In Pakistan, the term Christian can just mean ‘not Muslim.’ In fact, people in Pakistan are considered to be born into their religion, it’s not a personal faith. Therefore, some Pakistanis ethnically consider themselves Christian. 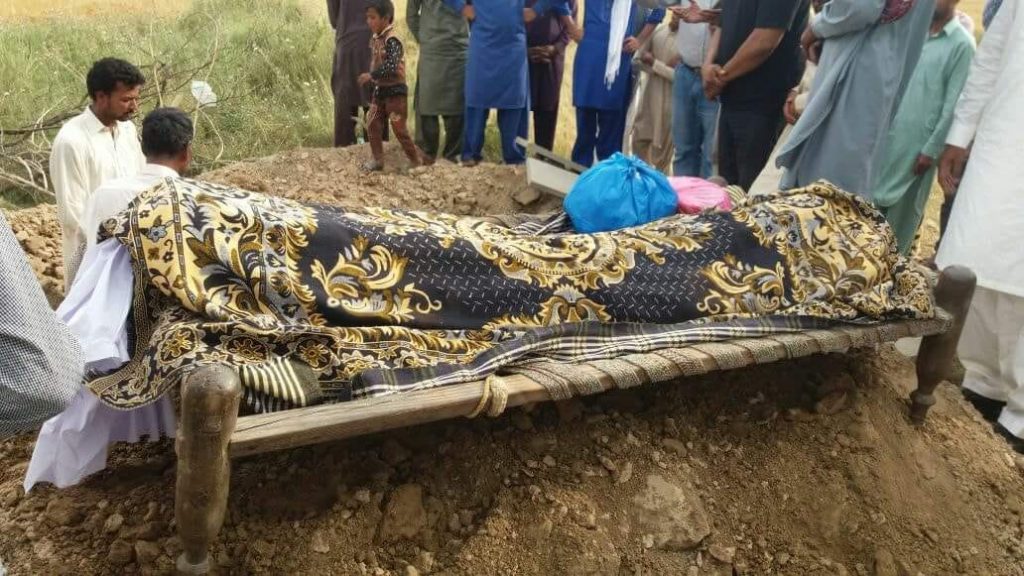 Kainat Masih’s funeral process and burial in Gujranwala, Pakistan. The fact that her body was wrapped in a fabric shroud indicates her family’s poverty; they could not afford even the simplest coffin. (Photo courtesy of FMI)
Add into the mix how most Christians are discriminated against in terms of education, and there’s a severe lack of knowledge–particularly of God’s teachings and promises.
Furthermore, Christians, both true believers and ethnic ones, have little hope in the Pakistani government for protection or help. Even if individuals in the government desire to create and pass legislation which benefits Christians, it more than likely would not or be enforced on a local level.

But, FMI’s Pakistan partners are trying to alleviate some of the pains of poverty. That’s because the problem is also a spiritual one. Churches in Pakistan disproportionately have more women than they do men. Since men are not supposed to address a woman who is not a relative, women in the church often go undiscipled and usually lack the ability to read a Bible on their own.
With that said, many of these churches have had quantitative growth, not qualitative growth. This birthed discussion between FMI and national leadership teams on how to address the spiritual needs of women.
“And a lot of it came down to some very practical things, such as so many of the women are involved in these poor employment situations where they are beaten and abused, we need to address those issues as well,” Allen says.
“One of the things that I was so encouraged by on my most recent trip into Pakistan was, for lack of a better word, a creative solution to this dilemma of outreach to women, and getting them out of these low-paying, abusive jobs in Muslim homes…Pastor Harris said, let’s set up a sewing and literacy center as an outreach specifically to women.”

FMI gave five manually operated sewing machines, bolts of cloth, and Bibles for this outreach. Each six-month class enrolls twelve women, and there’s not a lack of women wanting to take the class. Rather, there’s a lack of resources to enroll all of the women who want to take the class. The classes meet daily. 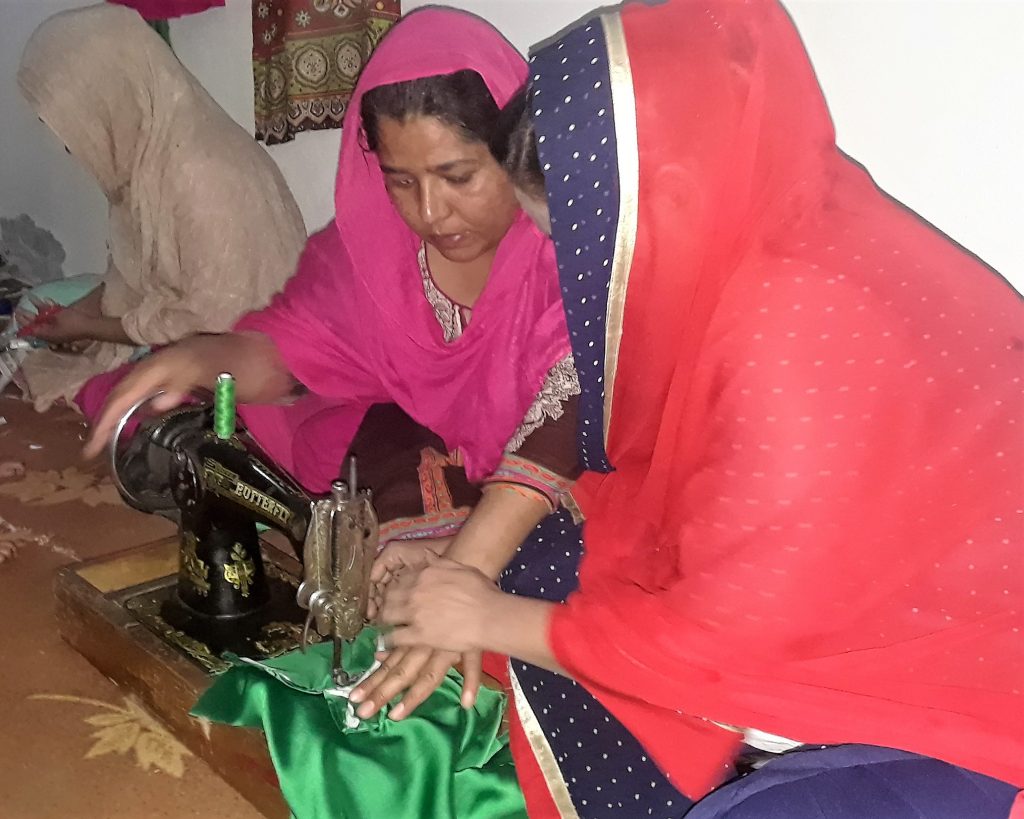 Women’s sewing and literacy outreach class in Pakistan (Photo Courtesy of FMI)
“They’re being trained in sewing skills so that they can become seamstresses out of their own homes. So, we’ve changed the work environment for them, they’re in a safer place. It’s a job that is in demand locally, so their income is better,” Allen explains.
Plus, these women are learning to read and the Bible is their textbook. This means they’re also being fed spiritually. And for many of these women, even just the literacy training is a huge step forward, especially for their faith. It opens the door for them to dig deeper into God’s word, mature through studying, and equips them to better share their faith and the Gospel message with other women.
“It’s transforming their lives because they’re having great fellowship with other Christian women. It’s changing their own life spiritually, and that’s spilling over into family life. In terms of couples, and the parents and their children praying together, reading the Bible together,” Allen shares.

Be Prayerful, Be Active

Pray for Christian Pakistani leaders to have a good grasp on what’s happening in their society and the needs of their congregations and neighbors. Also, pray for their ability and understanding to equip their congregations to respond to the needs around them as well as living out God’s values in their society.
And please, pray for the women and children who are trapped in abusive situations and employment. Ask that God would bring together the resources for more churches to start their own sewing and literacy outreaches to women, and that these women wouldn’t just be lifted out of these terrible environments, but that they’d see God’s hand in the process.
Another way to tangibly help is by donating to FMI’s ‘Tangible Resources’ fund to help provide the sewing machines, Bibles, and cloth for the outreaches. A gift of $150 provides one sewing machine and bolts of fabric. For $6, a Bible can be provided in the local language.
“We need to care for those who are the vulnerable ones in our societies and especially in our churches,” Allen says.
at June 06, 2018