Christians in Pakistan Village Told They Can't Have a Church… 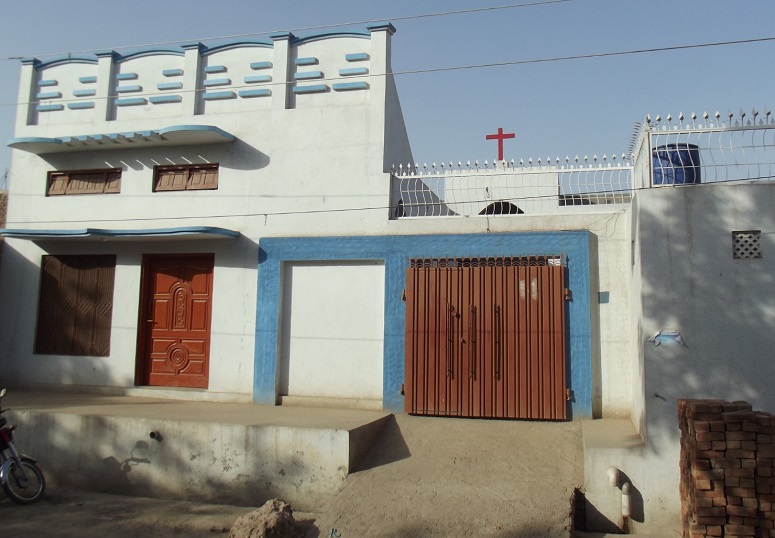 Christians in a village in Pakistan’s Punjab province have been told to remove every visible sign of Christianity from their church, six months after being forced to sign a form pledging they would no longer hold services.
The 40 Christian families in Nayya Sarabah (Chak 336) village, part of Toba Tek Singh district near Faisalabad, haven’t held a service since before Christmas.
Muslim resident Hajji Muhammad Siddique told World Watch Monitor that, as “Muslims are in the majority in the village, we can’t allow a church here”.
“Now we are working with the civil administration to give a piece of land to Christians outside the village,” said Siddique, 73, who runs a dispensary. “When it is done, we will make the Christians write an agreement that they will sell this current church building or at least dismantle the church structure and crosses.”
“Most of the Christians of the village work as brick-kiln labourers,” he added. “It is only Rafaqat Masih, who, being a retired army personnel, is trying to be a leader and has helped build a church in the village.”
The church is run by Pastor Samuel Masih, but it is Rafaqat Masih, a union councillor for minorities, who has been at the forefront of efforts to resolve the matter.

“Muslims are in the majority in the village, so we can’t allow a church here.”

Most of the Christians are poor labourers. The church belongs to Full Gospel Assemblies, an evangelical group working in Pakistan, and was built on land belonging to 70-year-old Christian named Rafiq Masih.
“Rafiq is childless, so he bequeathed this property for the construction of a church building,” Rafaqat Masih told World Watch Monitor. “The construction began in 2012 and we had been holding worship services since then. But in December 2016 the local Muslims objected over it and filed an application against us in the local police station. At that time, a compromise was reached and we again started holding services. But, again, in December 2017, they submitted an application in the police station, after which we were called in and were told to sign an agreement.”
The police station in the nearby town of Rajana brought together Muslims and Christians of the village on 14 December 2017, and had them sign an agreement according to which the Christians would “hold religious ceremonies in their houses. There will be no programme in the church. If anyone will violate this agreement, then legal action will be taken. [Christians] will not gather in any house for a religious programme. If there will be any violation of this, legal action will be taken”.
That same month, the Muslims submitted an application to close down the church, and the local police and civil administration told the Christians that, as their church was not included on the official list of churches that must be provided with security on Sundays, they could no longer hold services.
(Due to the rise of terrorism, all gatherings in Pakistan are provided police security. Churches are provided security on Sunday or any other given day that Christians request police protection. However, in this case, the police told them that the church is not part of the authorised list of churches, so they cannot be provided security. Now, because security cannot be provided, they cannot come together. So in the name of security, they stopped the Christians from gathering in the church, and also from worshipping in any house.)
The Christians in the village have therefore not held a service this year, but have made frequent visits to the civil administration to either permit them to hold services in their church or to provide them with an alternative venue.

‘We are being forced to demolish the church’

Christian and Muslim villagers were called together for another meeting on Saturday, 2 June, held in the presence of Deputy Superintendent of Police Muhammad Tahir.
After the meeting, Rafaqat Masih told World Watch Monitor: “We are being forced to demolish the existing church structure and, in lieu of this, they would let us build a church on a piece of government land outside the village which is already dedicated for a school.
“They haven’t even given any documentary proof that this piece of land would be transferred to Christians. Then another issue is that we worked for several years to construct this church building. Now who is going to pay for building from scratch?”
Masih, who runs a small shop in the village, told World Watch Monitor that he had submitted an application to the Toba Tek Singh Deputy Commissioner for including the name of the church in the list of the churches which are provided security.
“The civil administration tells us that they cannot provide us security, so it is in our benefit that they have stopped us from holding a church service,” he said.
On 22 February, the Toba Tek Singh Deputy Commissioner wrote a letter to the district police chief, a copy of which World Watch Monitor has seen, saying: “Priest (sic) Samual (sic) and others of Chak No. 336/GB (Nia Saraba) Tehsil and District Toba Tek Singh has informed the [respectable] Deputy Commissioner that they have established a church in said village and the police has not permitted them to offer their prayers… I have been directed by the [respectable] Deputy Commissioner to convey you that the tension between both the parties/communities may cause an untoward situation. In view of the sensitivity of the issue, you are requested to please look into the matter at personal level and resolve the issue, to avoid any law and order situation, which may result in disturbing the peace and tranquillity of society.”
Deputy Superintendent Muhammad Tahir told World Watch Monitor that the Christians being forced to pledge to end services was not legal. “We are trying to amicably resolve this matter,” he said.
Rasheed Jalal, a member of the district council belonging to the Pakistan Muslim League-Nawaz, said the Christians were “not being treated equally”.
He said he had met with several senior government figures, including the Provincial Minister for Human Rights and Minority Affairs, National Assembly members and Muslim clerics, but that “nothing worked”.
“Christians are peace-loving people,” said Full Gospel Assemblies Principal Dr. Liaquat M. Qaiser. “We don’t desire any conflict. If the local Muslims do not want Christians worshipping among them, then they should provide them an alternative place. They are poor people and do not have resources to buy another place and build a church once again.”

World Watch Monitor reported in December how many churches in Pakistan have been forced to close as a result of police not offering them security.
Pakistan introduced the Punjab Security of Vulnerable Establishment Ordinance in 2015 to impose security measures on worship places, including church buildings, prompted after the Army Public School in Peshawar was attacked in December 2014, when 141 people – mainly children – were killed.
The Ordinance says “that a committee, constituted under the law, will inspect vulnerable establishments on a quarterly basis and issue advice, in writing, to the manager of a vulnerable establishment for such security arrangements as may be necessary on the basis of threat perception”.
But precisely what is meant by a “vulnerable establishment” is not defined. It is quite possible that, if only a few people meet somewhere, the police may ask them to install heavy security equipment. And most small churches have been unable to meet those requirements.
Indeed, several court cases have been lodged against church leaders who had failed to put in place security measures such as metal detectors, CCTV cameras, walk-through security gates and barbed wire installed on church-boundary walls.
According to the Pakistan’s constitution, a person’s security is the responsibility of the state. The constitution also provides special protections for religious minorities in religious, social and economic matters. However, contrary to these constitutional protections, churches are often forced to provide for their own security, which is primarily the responsibility of the state.
at June 04, 2018